Last night's plans, simple ones of going to stitch and bitch, were derailed by a migraine, which had been on-and-off and mostly mild all day, but started getting worse at the chiropractor (not from anything he did, I don't think, but coincidentally). I started to drive over to SnB, just really wanting to go, but halfway there came to my senses, pulled over, texted apologetically to the friend I knew would be there, and turned around.

Once I got home, it was bad for a while, maybe an hour, maybe less, then started to get better. I got in bed for a while, not exactly sleeping but just zoning out. I couldn't get warm, and kept getting up for more layers, but maybe two hours later I got up feeling closer to human. Some saltines and ginger ale, watched part of the Bruins game, then went back to bed. My sleep was choppy, but not too bad.

And today has been postdrome, headache hangover, all the way. Woozy and low energy, but not pain. Just feeling off.

Part of that could be dread of tomorrow's snow, too. Might be another foot of it. Siiiiigh. 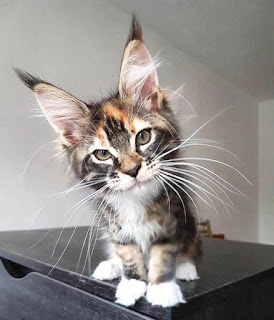 I fell in love. The ear tufts, the whiskers, the paws, the expression... He's looking at me, and I feel like he gets me, he understands, and it's all going to be all right.

Maybe I'm seeing what I need right now, but anyway. Looking at him made me feel a little better. That's worth something, on a day like this.
Posted by ccr in MA at 4:48 PM