Something has been bugging me lately that I had decided could wait to be resolved until after the move, not just to avoid dealing with it, but because my desk setup there will be slightly different and that may affect the solution, but today it is officially Bugging the Shit Out of Me, so I may need to try to fix it sooner.

This is the crucial issue of a laptop stand.

Yes. I know. How annoying could that be, right?

Well. Let me tell you.

I've had this computer for a couple of years now, and although most things about the change from desktop to laptop are good, I don't like the angle of typing on it flat, and the way I have to bend my head down to see the screen at the same time. If I raise the entire machine up, then the screen is at a better height, but the keyboard is all wrong. I don't really want to use a separate screen, or a separate keyboard, all the time: I like the flexibility.

So a couple of years ago, I got a small, riser kind of stand, this one. Small, portable, allows for airflow under the machine. Good. 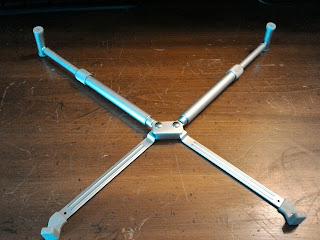 But because it folds down to this: 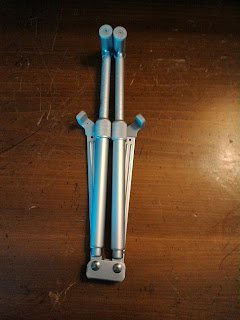 It is very easy for it to get just slightly out of whack, like this: 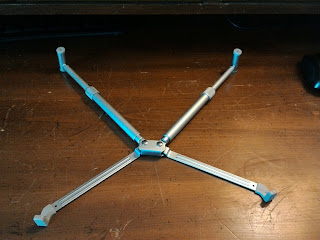 And the laptop goes off one corner and is crooked and drives me crazy. I guess since I did all the desk switching around a few months ago, I find myself sliding the laptop back and forth more often, and to get this to move, I can't just push it over, I have to lift it from both sides, carefully, and be lucky. (I don't actually mind the two hands part, but the "two hands and then it still doesn't frequently work right" part has been getting on my last nerve.)

So, back in February, I looked for something that would be similar, but not have the same kind of movable parts. I found this one, and put the old one under my work laptop, which mostly stays in one place, but benefited from the angle. 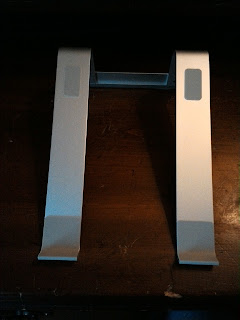 It stands at a higher angle, but I adjusted to that. The problem was these little non-slip pads on the bottom. 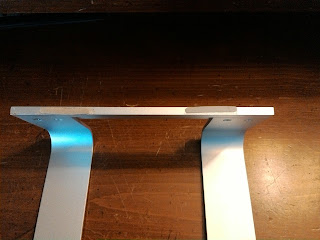 They really, really don't want to let it be slid back and forth. In fact, they started to shift around, causing different but equally annoying problems in moving the stupid laptop. They annoyed me enough that the other day I switched the two stands, but today, the way the first one has of falling off one corner just drove me nuts enough to go back to using it without a stand, even with the physical discomforts that causes.

So, I need to look into a different one. If anyone has any tips, pro or con anything specific, I would be ever so grateful.
Posted by ccr in MA at 4:55 PM