How many times have I started a post on a Sunday night that essentially began, "It was a good weekend, but not long enough"? Well, here I am again.

I got my errands done as planned on Saturday morning, and yes, the guy at the UPS store did ask what the swift was, but not in a you-crazy-person way, and only after he had found me a tube for it. I did the banking, dropped things off at Savers, and found my favorite cold coffee at Target. It was a very satisfying morning.

I tried to take it easy in the afternoon, though lately I find that hard to do, as once I sit down on the couch, I keep thinking of things I could do, and keep popping up to look at this, move that, or write myself a note about the other. (My attention span has really decreased in the last few months. I hope it comes back.) I did get a few small things done, and eventually, it was time to go to my friend's birthday party. Which was great fun, though I did most of my catching up with the other people who sat down at least part of the time. Anyone who could stand up for a few hours? I mostly got to speak with only briefly. There were a few dozen people there, I was never going to have long conversations with everyone. It's okay. It was a good time.

While my attention was thus occupied, the Bruins took on one of the few teams in the league above them in the standings, and soundly beat them. Happily, NESN replayed the game this afternoon, so I could see it for myself. The only bad moment was David Backes getting cut in the leg by a skate; per updates, he had to have 18 stitches (ow), but it didn't cut anything like tendons, so that's good. I expect we'll hear more tomorrow about how long he might be out. And when Chara and DeBrusk might be back. And updates on Bergeron's and McAvoy's injuries...the team really has been slammed recently.

I went out today to get lunch, and picked up a few groceries, and though I didn't have a ton, carrying it in seems to have aggravated the same back muscle I strained shoveling last week. It was so sore Wednesday that I went to the chiropractor for him to work on it; it was considerably better the next day, and by this morning, I had almost forgotten about it, but now, ow.

The one other thing I did today was to go looking for a piece of wall art to put up in one spot that had a few too many nail holes for my preference. It occurred to me that a place like Home Goods would probably have something fairly neutral, and big enough to cover the holes.

Is this reminding anyone else of the bedspread story?

Because yes, I found something, but again, it isn't a "neutral, will do for now, and then I will get rid of it" piece; again, I found something that I like, and plan to keep. I'm not sure if it's a coincidence, or if it's easier to find something you really like when you aren't looking for it. 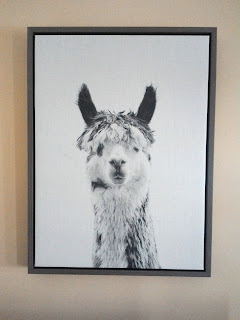 Not that I was planning to name him, but ... looking at him, I think he just left the boy band to make his first solo album, and this is going to be the cover photo.
Posted by ccr in MA at 8:36 PM

LLama'ste, if you don't mind the atrocious pun. I like it.