Of camera and cameras

In search of aid for my camera woes, I went to Canon's website to see if there's a facility nearby where I could go in person to learn more about repair options. The service finder on the website is clearly set up to do that, the same way I can search most chain stores' sites to find the nearest Petsmart or Hannaford store, but in this case, the only location listed was 900 miles away, in Illinois. That's a bit far to go on an errand, though of course I appreciate the link to click for directions in case I decided to do that.

Instead, I sent them an e-mail, explaining the problem. Since I learned that these cameras have, in the past, had problems with the battery-level sensors or whatever they're called, I mentioned that I was only opening the battery door to work around this issue, in case that helped. (No idea if it did.)

I was pleased with how quickly I got a response: only about two hours later, and this on a holiday weekend! Go, Canon. They say I have two options, since the camera is well out of warranty (which I knew): I can purchase a new, or rather a refurbished camera at a reduced rate, or send mine in for repairs.

The other choice, sending it in for repairs, means being camera-less until they receive it, send me an estimate, and then make the repairs if I authorize them. Considering that:

"The standard labor cost to make the repair is $79. Parts may be an additional cost."

I think I may choose door number one. And I'm pretty sure I'll get the same kind, the A530.

The bigger one, though doubtless a good camera (it's a Consumer Reports Best Buy, even), is more than I need, weighs more, and so on. There are already settings on mine I've never used! I hardly need a "superzoom". And the little one, though very portable and pocket-friendly, gives me nothing to hang on to. My hands are, ah, challenged, and I remember from camera shopping last time that I felt like I was going to drop the smaller ones. I like the "handle" that the A530 gives me: 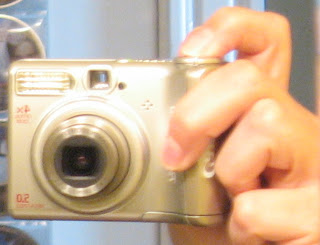 CNET's review calls it clunky-looking, but points out that it "... provides a steady grip." Yes, and I appreciate that. In fact, I've proven that I use it. I don't mind a camera that "won't elicit any impressed gasps from your friends"*, as long as it feels right and takes good pictures.

*Really, is that criterion on anyone's list? Perhaps I run with the wrong crowd.

Sometimes I'll make myself a note for something to remember to blog about later. The problem arises when too much time elapses between incident and seeing the note again. Or maybe I overrated my memory for details?

I went to take a note card out of my bag. On one side, I had made a list of the magazines in the waiting room at the neurologist's office, when I was in for my migraine appointment:
Isn't that an interesting mix?

Unfortunately, one of the other notes simply lists these items:
What in the world was that? Memory fails me. It's too bad; it sounds like it could have been worth sharing.

It reminds me of when I had a little writing club with a couple of friends, and we set ourselves the task of writing short stories that featured certain items: a hockey stick, or an autumn leaf, or the like. That was kind of fun. What story would you tell with that list of items?
Posted by ccr in MA at 6:42 PM

Email ThisBlogThis!Share to TwitterShare to FacebookShare to Pinterest
Labels: camera

I decided I really hated my knock-off crocks when they fell off my feet as I transported the baby and all his comfort items, including a beach ball, over the hot sand on the beach.

not bad - even if I say so myself.

Hope you had a good holiday!

Personally, I wouldn't have tripped over the hockey stick if it hadn't been coated with so many multi-colored autumn leaves sticking to the dried blood on the handle.

I hate crocs. My feet swell, burn, and itch inside them. They have all the breathability of a rubber beach ball. I don't care if Parents Magazine show troups of babies and toddlers wearing them. They are just *not* me!