As I mentioned last week, I've started a new knitting project. And I'm having such fun!

I wanted to use the Infinity Fade gradient set from Fiber Optic in a pattern that would really show off the progression. It's 14 colors! And I don't want to waste a bit of it. In poking around on Ravelry, I came across Valente by Martina Behm, which is described as a "cape-cowl-hybrid" and can be made to button up or not. Since it's done sideways, using short rows, it seemed like a good match to the yarn. I cast on more stitches, so it would be a bit longer than designed, and do not plan to add a button band. It's a simple pattern, which is suiting me just fine.

Just to get the negatives out of the way, I am finding that the yarn bleeds a bit; I don't notice it too badly on my hands, but see the needles? The one on the left used to be about the color as the one I out next to it. 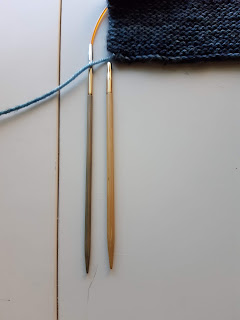 The set came with instructions on rinsing with vinegar to help set the colors, and I will certainly do that.

The other things is, I had a terrible time winding the yarn! Something about the way each mini was wound and tied off, I don't know, but there was much cussing done. However, even in the midst of it, I knew it would be worth it, and it is. 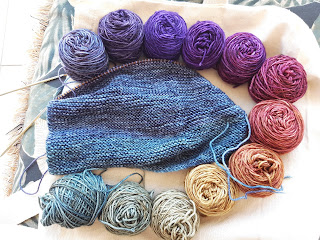 The Bruins play this afternoon, and I'll be knitting and watching. I'm into the third color, so over one-seventh done!