(Edited to add: This info has an update! Check out the latest: Scrubbies 201!)

Not that you asked, but I thought I would share the "secret" of making the dish scrubbies out of netting, otherwise known as how to turn this (aka coarse netting, bought by the yard): 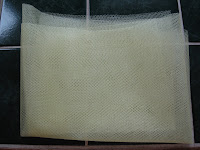 into this (fabulous and desirable dish scrubbies): 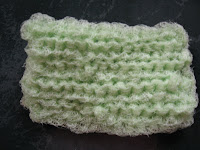 I bought the netting at Fabric Place, but you can usually find it anywhere fabric is sold. It cost me 99¢ a yard last week, and a yard makes about 4 scrubbies the size I usually make them (but it all varies by the maker). Your time is certainly the larger 'expense', anyway. Here's how I do it.

I fold the material into a long piece, and clip it along the length because otherwise it won't stay put that way: 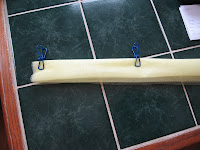 Then I cut it into pieces roughly two and a half inches long. I use my finger as a measure because it's easier than getting a ruler in there: 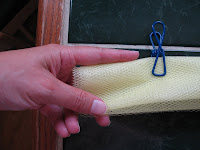 Too thick, and it's hard to work with; too thin, and the scrubby isn't as strong. (Some netting works up stronger and some not as strong, by the way, but I haven't figured out how to tell which is which before it's made up; if you do, let me know, eh?) Take the little strips: 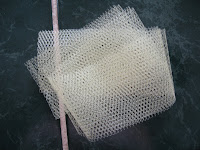 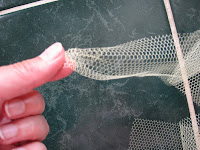 and roll them into balls: 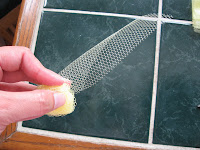 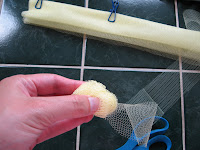 tucking the ends in: 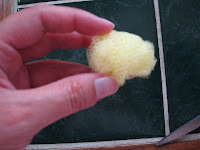 This is how many I got from a yard: 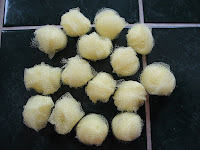 You can make them whatever size you want, literally. I have made round ones, just to see if I could, and I even made a 3-D one as an experiment once after seeing an "apple" made of netting at a craft fair. But my standard is the rectangle, and comes out about 4 inches by 2 1/2. Habit, I suppose.

A note: If you crochet, these instructions will make some kind of sense; if you don't, well, I didn't either before Grandma passed the torch to me, so it can be done, but I don't know if you're going to learn from me today! I would recommend picking up one of those basic booklets they sell at places like Michael's, since that really helped me understand what I was supposed to be doing (Grandma is a wonderful woman, but her instructions got to a certain point and then said "Crochet as usual", which didn't help me much).

I cast on about 15 stitches with an H or I size hook before turning and single-crocheting the rest of the way. That's it, it's all single crochet. When I get to the end of a strip, I tie the end of the next one to it and keep going. It takes about 4 strips to make one, more or less. After I finish the 'body', I use a G hook to tuck in the loose ends.

Yes, it's hard on the hands, working with the netting! I find doing one takes about an hour, and I don't generally want to do more than that at a time. But it's worth it!
Posted by ccr in MA at 8:42 PM

Email ThisBlogThis!Share to TwitterShare to FacebookShare to Pinterest
Labels: crochet

This brings back memories of dish scrubbies a great-aunt used to send our family (and maybe still does). They really worked great!

My grampa's crochet instructions went something like "Take the snake, poke it in the eye, strangle it and pull out the guts. Repeat." I was 5 at the time, and lived in a semi-rural area, so the instructions were not so bizarre to me then as they would be today.

Excellent scrubbie instructional. Thanks! I think I'll try wearing thin latex gloves when I make them. My hands are scoury enough!

BTW I am a fan of the Coats & Clark instructional CD-roms to learn knit and crochet:

Dude, I want to make scrubbies.

Also, I am on a sock jag, and have two non-fussy sock patterns to recommend to you.

First, the Jazz Socks in Melanie Falick's Weekend Knitting are pretty easy, and have no heel-turn and no reinforced heel.

But best of all I love the Strong heel socks, which are super easy and do not even require picking up stitches! They are weird to learn the pattern for, but once you get what you are doing, it's shockingly easy.

The Strong heel pattern is in the Fall '03 Knitters magazine, which you can order here:

I crochet and knit but can't visualize. Help! on the scrubbies do you crochet with or around the net. I would love to make these for our church bazaar. Thanks

This is more for my understanding than anything. I think you are cutting the netting and rolling it into balls to use as your crochet thread. Correct? You then chain 15and then turn your work and single crochet in each stitch across, tying your netting as needed and continuing on until you get the size you want. I have looked for this pattern for a while now and was so glad to find it. Thank you very much. I like old (new) things.

Look on ebay or elsewhere and you can find 3" wide spools of the netting there are about 40 yards on the spools I think.

I have a question on making the scrubbies I would like to make them bigger around how would I do that?I'm trying to figure that out.. Thanks.
Blessings Sister Brenda

Wow, thanks for this! I've got a bunch of nylon net to use up. I was wondering the best way to cut the strips, and this makes good sense!

The wider the holes are,the stronger the netting is.

If you put a little talcum powder on your hands before starting to crochet or knit the net, it will not be as hard to work with also if you open the yardage and fold it opposite of when you buy it, it will be easier to work with.

I just finished making a crinoline for a 50's dance and found the easiest way to cut netting straight is to leave the original fold, fold from the oposite end (now you have 4 even layers) pin it to an old type cutting board (corregated cardboard with a printed grid) pin it down as close as you need to for your cut with push pins and cut on the preprinted lines. Also, use your kitchen sheers as nylon netting will take the edge off your sewing scissors.

You can purchase nylon netting for making scrubbies on a spool pre-cut to 3" wide X 40yds long. Saves a bunch of time on having to struggle with cutting the fabric by the yard.
Buy it at The Tulle Shed http://www.tulle-shed.com
They have 40 colors to choose from plus they give you a free pattern for making a round double-sided scrubbie