I wouldn't blame anyone reading here recently for being a little tired of the continuous moving/condo-selling angst that has been filling the space, as it has largely filled my mind. Of course, that doesn't mean I'm not going to keep blogging about the same thing for the next month or two! My blog, my rules, after all. But I think it would be good for me, as well as possibly more interesting for you, if I mix some other things in. Like about the Bruins, who by the way did not disappoint last night, or about knitting. Because yes, I do still knit! A little, anyway.

For instance, the cowl I started in March with that amazing angora...I finished it last Thursday, April 5th, and started wearing it immediately. The soft-and-fuzzy was (is) very comforting in times of stress. Well, chilly times of stress, anyway. Which these are; today was decent, it might have been 60, but that's the highest point recently or upcoming. It even snowed last Friday. But anyway.

Anyway, the cowl got washed last night. Here it is before: 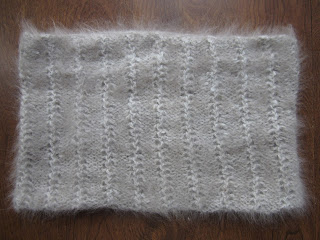 Slightly wrinkled up from wearing, but look at the halo on that. (It does shed a little, but it's worth it to me.) 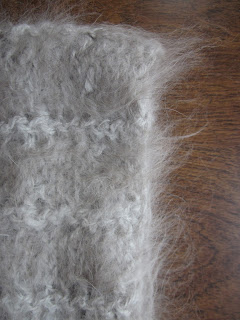 And the reverse side. I like the look of both. 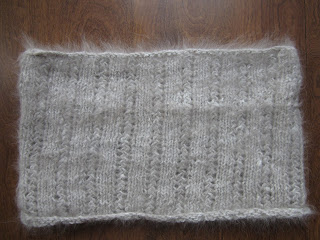 Washed, water toweled out, laid on a towel and shaped slightly. 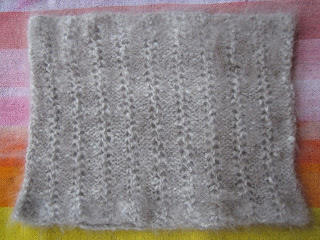 And no, the wash didn't diminish the halo at all. It's still the fluffiest thing ever. 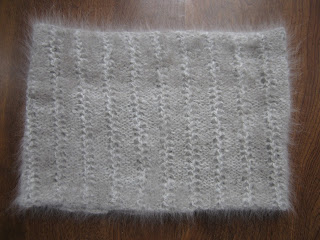 Any non-knitters who want one of these, if you pay for the yarn, I'll knit it! (They have an etsy shop, with a section for Angora Handspun & Fiber that I hope will be updated often.) My cowl took almost every bit of my skein, which was 2.3 ounces/158 yards, but the skeins I saw varied tremendously in size, so that's something to be aware of. It was lovely to work with.

In other knitting news, I was working away on the sock I mentioned last month, but do you see where I mentioned that the yarn was a bit prone to splitting? Cue the ominous foreshadowing music. It was actually difficult not to split stitches, and after talking it over with a knitting friend on Monday, I decided to put it aside for now. I need my knitting to be soothing, not even slightly annoying, right now. Even though I got all the way to here: 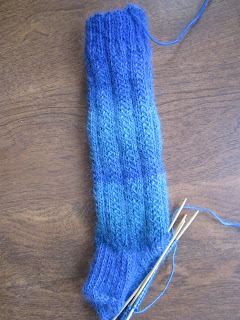 Instead, I started this one: 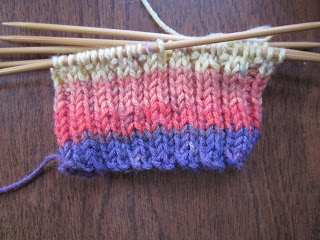 Using the other yarn I got at Webs in February. 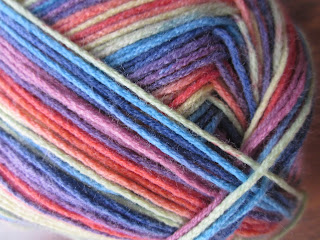 It's being much less trouble, and that will do for now. I might even pull it out tonight, as I turn on NHL Live before the non-Bruins hockey game, to hear what they have to say about the Bruins last night.
Posted by ccr in MA at 5:48 PM

The cowl and yarn are beautiful. Mind sharing details?? E.g. how many stitches you cast on and what is the stitch pattern? Glad you are finding soothing knitting right now-- moving is sooooo stressful!