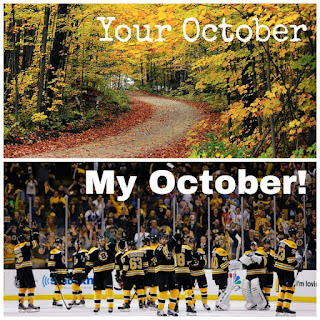 The Bruins prospects played in a mini-tourney against the Buffalo and New Jersey prospects this weekend, which I was able to watch part of online (part of both games, that is, around other things I was doing: Boston 5 to Buffalo 2, and NJ 4 to Boston 3). Unfortunately, neither game was done by the Bruins announcers, so there was more of a focus on the other sides, but still it was fun to have real hockey going again.

And this week, full training camp starts, which mean exhibition games start next week. And, according to the Bruins, one of those games will be televised! A week from Thursday against Philly is supposed to be on TNT. The rest, well, they'll be on Bruins radio at least, so they'll be talking about the players I want to hear about.

Those two pictures are begging for a pun about the road to Bruin.