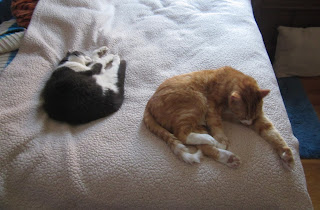 Sweet picture, right? Look how cute they are, and how well they're getting along!

Well, a picture can be worth a thousand words, perhaps (I should count how many I have here when I'm done with this!), but it can also be very misleading. For instance, Belmont has been on the (nice warm) bed a lot more than usual this week, since that heating unit has been out of commission and it's cooler in here than usual (it's supposed to be fixed tomorrow), so perhaps she is putting up with more than usual in the name of warmth. Also, it's a lot easier to get pictures of the stationary, well-lit, no-fuss, peaceful moments than the howls in the night.

I remember a Calvin and Hobbes strip where Calvin is pushing the mess in his room out of the way so that he can take pictures showing how tidy he was as a child, for future use in his autobiography. And the truth of this picture is that although there is some "peaceful coexistence" in the relationship between Carlos and Belmont, there is also too much* of the "yowl and scuffle" going on, especially in the night when I can't see what happens, but I sure can hear it.
*Truly, any is too much, but really, I would settle for almost-never, rather than daily.

I've come to realize over the last few months that certain factors about Belmont (her inability to be friends with Carlos, her need for lots of attention, and her VOLUME) add up to a cat that is not working out for me*. Especially since I started working from home, the latter two items have become very obvious, and since the first item means I've never fully bonded with her, the yelling and complaining and interrupting my work time have become less and less tolerable. And given how much the working from home thing is suiting me otherwise, it isn't something I want to stop doing.
*Which I hate, incidentally, as this is now the third cat I feel like I'm giving up on, one way or another. But here I am.

Let me clarify, if I can: Belmont does sleep a lot every day; she's a cat, and an old cat to boot. However, several times a day she will come to where I am at the computer, working, and yowl. She wants up on the desk, she wants me to pet her, and if it was for a minute or five minutes, I could do that, but seriously I think she would want an hour at a time. She is very hard to discourage, walking between me and the computer, bumping her head against my hand at the mouse or keyboard, always with the yowling, and honestly, she's just being a cat, how can I be mad at her for being a cat? Well, but I can, though, especially since I prize a peaceful home and she is Just So Loud.

None of this is news. At least, in hindsight! I mean, early on, I was talking about her "crabby meow," right? I also mentioned how she was "happy to have me pet her and pet her and pet her." And by her lights, she is a nice cat: she's affectionate, she purrs, she likes company (human, anyway). For the right person, someone who has a lot of spare time, and no other cats, she could be a great pet. But I am not that person.

I'm not sure what will happen next. But whatever happens next, at least now you know it's heading that way.
Posted by ccr in MA at 4:55 PM

How old is she? Not to be morbid, but... can you stick it out until she expires? I know she's not young.

One of my cats goes on benders where he seems to push the limits of Just How Much I Will Take before... disposing of said cat. There was the period where he repeatedly peed on all my clothes. Then when he peed on all of my then-bf-now-husband's clothes. Then when he started standing at the front door and crying ALL NIGHT LONG. Or when he (current phase) wakes up earlier than we want to, and goes around the bedroom purposefully making noise on all the most annoying surfaces possible until husband either gets up to lock him in another room or shoots him with a nerf gun.

Cats, man. I love them but sometimes it's hard to understand why.

Oh I am so sorry. I had hoped Belmont was working out better but I know what you mean about the unsuitability of one cat in the household. We're currently dealing with this to a lesser degree. Our daughter's cat and our cat don't really get along but it's not full out war. They can be separated but we are trying to get them to at least tolerate each other.