Of Quick Knits and More Yarn

It snowed pretty much all day today, but it didn't accomplish much; the flurries were lackadaisical, and often when I looked out they were wafting sideways or back up, instead of heading toward the ground with any determination. Just what I like in snow, if we must have it! It looks as though a big gust of wind would clean my car off for me (though the last time I looked, it hadn't).

Compared to the snow, I accomplished a fair bit today, including laundry and paying the bills and making dinner, as well as some loafing and knitting time. I've just finished the second cuff, and given that I started the first one Friday night, it goes to show that they are a quick knit. 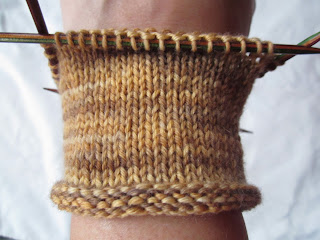 What cuffs, you say? Well, I mentioned a few weeks back that one of the things I wanted to knit was a pair of cuffs, to bridge the gap between my gloves and my shirt sleeves, where the chilly fingers of the wind like to reach in. I tried wearing my gloves over fingerless mitts, but they're just a little too bulky to fit together comfortably, so cuffs it is. I used this pattern, though since I didn't do the houndstooth patterning, it was more like a guideline, so I didn't have to guess at needle sizes and number of stitches/rows. I found the leftover yarn from those cashmere socks, and the first cuff only took 6 grams, meaning I have enough of this yarn to make four!* Not that I'm planning to, but still, it amazes me how little it takes. I put them on to try them out, and my hands feel warmer already. Nice! I'll have to get someone to take a picture of them on me.
*Does anyone on my list want some cuffs for Christmas?

Yesterday, I had a little yarn-related adventure. Last fall, there was a Groupon offer for a store in Natick called Fabric Place Basement, and I indulged, not wanting to pass up paying $29 and getting $60 of yarn. I knew that I wasn't likely to go in the fall, given how yarn-full my fall always is, but I figured that it would be a nice adventure after the holidays. I don't live close to Natick, but it's less than an hour away, and easy highway driving to boot.

The first thing I saw when I went in was this sign: 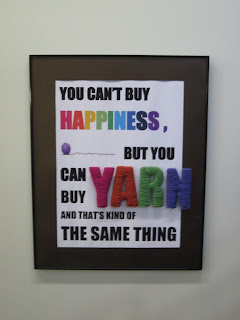 Which reminded me, in a good way of course, of this picture: 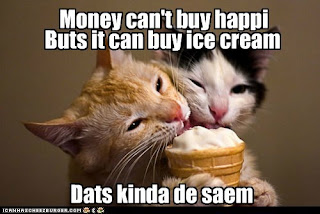 I love ice cream, but yarn lasts longer. And FPB has a lot of yarn*. I almost left five minutes after I arrived, after I touched this yarn. Swoon!
*And other stuff, I guess, but you know I stayed in the yarn corner. 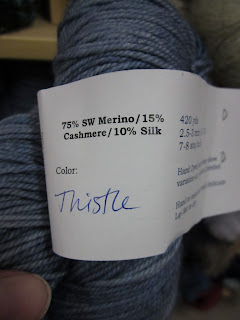 Cashmere magnetism at work again! But I felt like, delightful splurge though it would be, five minutes of shopping and two skeins of yarn is not exactly what I wanted. 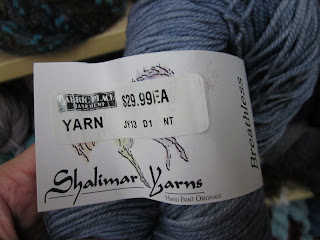 Note to self, though: Shalimar Yarns Breathless feels divine.

Surprisingly, so did this: 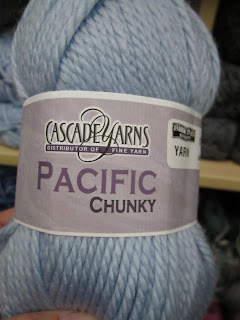 Cascade Pacific Chunky, more acrylic than wool, but a very nice feel to it. I didn't get it, however, as I couldn't think of anything I wanted to make with chunky yarn, which makes knowing how much to buy challenging. (This is part of the reason I have so much sock yarn: you buy enough for a pair of socks, period.) I made sure to take a picture, though, for future reference.

So what did I get? Well, I went around their well-stocked yarn department many times--I was there for about an hour and a half--and ended up with these: 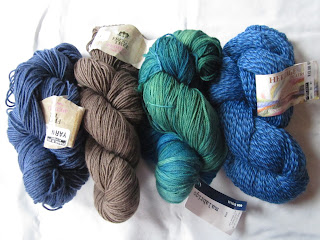 Specifically, we have this gorgeous skein of Malabrigo sock: 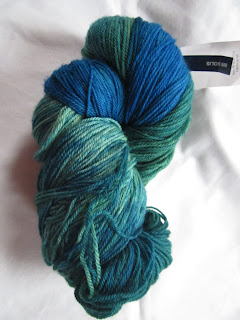 The colorway is called Solis, but the saleswoman suggested it was the color of a peacock feather, which I think is far more descriptive. I've knit with this one before: the yarn that didn't want to be a sock, but became a happy little Wingspan instead. These may actually become socks, who knows.

Next is this speckled lovely: 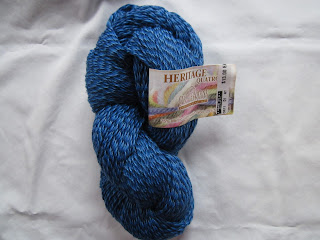 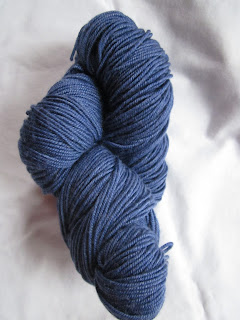 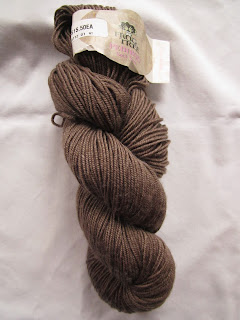 This is 80% merino and 20% bamboo, and I was unable to resist taking two. I guess we'd better hope I like working with it!

I also took pictures of this cool sewing machine they had as a display: 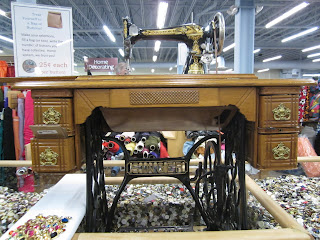 And I'll leave you with lots of the fun signs they had around the yarn department. Smile! Yarn lovers abound! 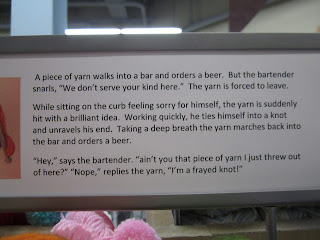 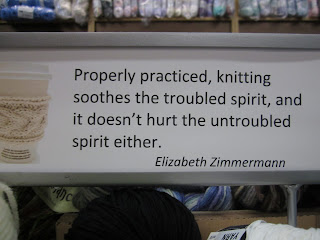 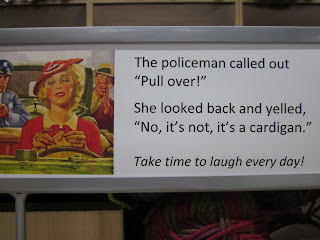 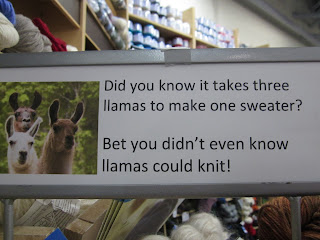 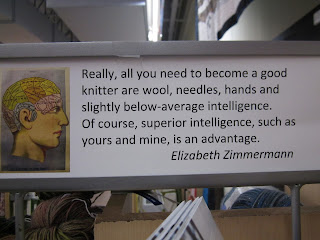 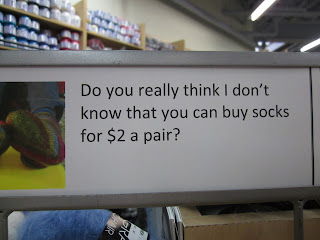 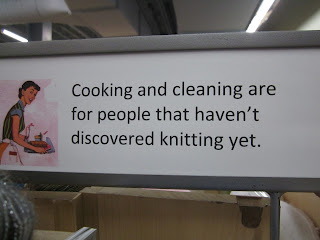