Of This and That

Possible last blanket update*: it has been gifted. On Sunday afternoon I was invited to dinner, and although I had been thinking of bringing it to stitch and bitch on Monday for one last show-off, I decided I just wanted to hand it over and be done. They were pleased with it, and I put a picture of it on Facebook yesterday and received a gratifying number of compliments. Ahh, done!
*Because who can say for sure?

*****
There was a beautiful picture of hajj pilgrims in Saturday's Globe that I was going to cut out (I still get the actual papers delivered on weekends, though I mostly read them on the tablet just the same as I do during the week), but then the paper wasn't there. So I looked for the photo online, and found it in a week-in-photos listing (and it's worth clicking on the photo to see it larger). 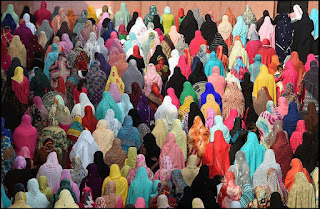 The colors, the pattern... I just love it. The photographer is named Arif Ali (according to the credit line, which also says AFP/Getty Images), but my first round of Googling did not locate a way for me to purchase the photo. Wouldn't it look stunning framed on the wall? I'll have to try again.

*****
This year's winner of the First Random Birthday Greeting award is the place where I was getting my car serviced up to a year ago--I've been taking the Kia to Kia since I bought it. Since this card gives me a free oil change, I'll probably go back there next time! Which I guess means they win, but whatever, free oil change.
Posted by ccr in MA at 6:48 PM