I had plans to write last night, but a major bout of thunderstorms blew through and in their wake the power went out. By the time it was back, three hours later, I just wanted to finish my book before bed, and I didn't even turn the computer on.

Yesterday was an odd day for weather overall. When I woke up, it was overcast and rainy, but that finished mid-morning, and the sky began to clear. Why do I seem to subconsciously expect the morning's weather to last all day? The afternoon was nice, sunny and warm, but then the storms came along and there was thunder, lightning, and hard enough rain that it shook the windows as it torrented down. Only after the worst went by did the power go poof. Thankfully, the daylight lasted most of the outage, enough to knit by at least; for the last hour or so, I was knitting and then reading by the light of a little hands-free craft light I picked up at Michael's once for a couple of bucks, which is only slightly more powerful than a single candle. (But, crucially, scent-free. I like scented candles now and again, but not for reading by.)

It wasn't a bad day otherwise. My head gave a twinge or two in the late afternoon, but never went fully into a headache, so that alone would make it a good day*. But I also got in some puttering time in the morning, so crucial on the weekend, as well as errands in the afternoon. I had a short list of things to do: library to return and pick up books, post office to mail a few things, Wilson's for more peas (this has been both a good and a long pea season, wow)(though if you get them seven times in two and a half weeks, it's possible your sense of time will warp), and drop off the bag of last week's pods for a friend's compost.
*A little sad that my standards are so low, but there you are.

When I saw the skies clearing in the morning, I felt that I should add to that list and build in a little time outdoors (other than in the car); being me, I immediately hit on knitting. Wouldn't you? I thought that going to a Panera for a frozen drink, then sitting with it outside and knitting, would be a great way to spend a little nice-weather time. I opened up Google Maps to my area, and entered Panera. Up popped all the local ones, but then I noticed there were spots in another color also showing up. I hovered the mouse over one, and they were Dunkin Donuts locations! They must have paid to link when someone searches on Panera, which made me laugh out loud. I like Dunk, but I don't think of them and Panera the same way. (I did a Starbucks search, and the same thing doesn't happen. Does this mean that DD thinks of Panera as a competitor, but not Starbucks? Interesting.)

I made my stops at the library and post office, and may I ask, have you used the automated machines at a post office? I love the convenience of them, but sometimes they're crazy-making. Here's how it goes: you tell the machine if you're sending a letter or package, then where it's going. It weighs it, sometimes asks about the size, then offers options of how to send, with speed and cost options. So I select Priority Mail, say, and the next screen offers additional options*, such as insurance, or delivery confirmation.
*The would-you-like-fries-with-that tactic

I click on the "just send it Priority Mail" button, and it pops up a window touting the wonders of insurance*, would I like insurance? No thank you.
*No fries? Are you sure?

Next screen: How about delivery confirmation*? It's so amazing! No thank you, and finally it goes on to finish the transaction.
*Waffle fries, maybe?

I walked out laughing over how absurd it was, and finally pinned down what it reminded me of: Douglas Adams.

There's a scene in The Restaurant at the End of the Universe where Zaphod is trying to take an elevator up in a building. I say trying, because the elevator doesn't want to go up.

Now every time I use a machine at the post office, I'm going to hear, "May I ask you if you've considered all the possibilities that down might offer you?" in the back of my head.

Amused, I swung around to a nearby Panera. I'd been thinking of getting a frozen caramel, since it's so good, but I decided to try the frozen lemonade, which sounded like it would be refreshing on a hot day. It was, but it's definitely on the tart side, and you know what a sweet tooth I have. I'm glad I tried it, but I probably wouldn't get it again. Still, it was pleasant to sit outside with, in the shade, knitting. I cast on a Wingspan; when I went to Coveted Yarn last month, one of my purchases cried out to be a Wingspan. Can you hear it? 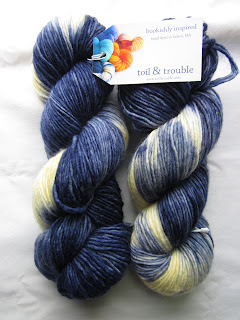 The colorway is called Starry Starry Night, and it's from a new-to-me local dyer, toil & trouble, in Salem (what a great name for a yarn person in Salem!). It's soft and beautiful, and I'm looking forward to seeing how it goes. Since I cast on 120 stitches, to make it deeper than the last Wingspan I did, I'm not very far yet, even after all the no-power knitting I did last night. 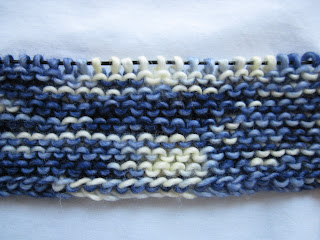 Wide, but not high. Not yet. I have the two skeins for the shawl itself, then I think I'll use a coordinating yarn for the edging: 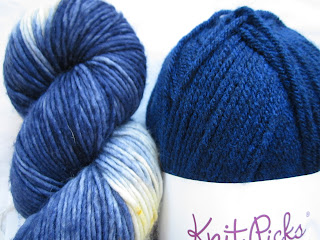 That way, I don't have to worry about being sure to leave enough of the t&t. Perfect!

That's yesterday, then, in not-so-chronological order. Today, I have finished four loads of laundry (all I had quarters for, but honestly that was enough for one day), and balanced the checkbook (virtually speaking), and read the paper, and patted the kitty. 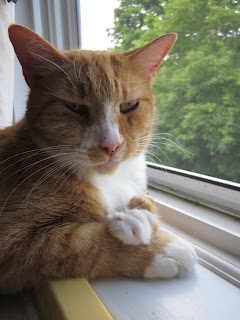 The paws-crossed pose just slays me.

Other things I may get to, later today, include vacuuming (oh, the excitement), and running the dishwasher (I'm out of spoons), and flattening the cardboard for this week's recycling pick-up (woo). Later, though, I'm going out to knit with a friend. Not a bad weekend, overall.

A housekeeping note: Any Keurig users who want to try a cinnamon-flavored coffee? I got a free box, and while I don't hate it, I don't love it. I'd be glad to send a few cups to anyone who's interested. If you have, or have access to, a K-cup machine, and want to try, let me know. (I specify K-cup because they have a new system now, Vue. And do you know why they do? Because the K-cups are going to lose patent protection in September. Isn't business interesting?)

Other sights from recent weeks: 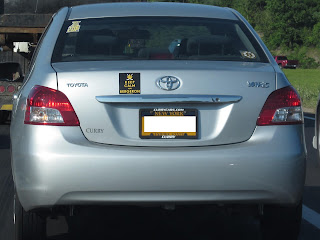 Three Bruins stickers on a car with NY plates. Interesting! 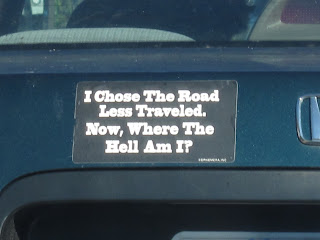 The funny thing is that I saw this when I was totally following the GPS, with no idea how "where I am" would lead to "where I'm going". 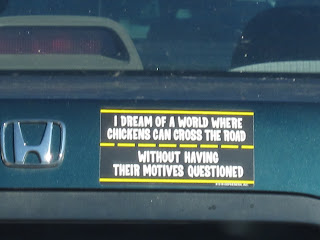 This just because I liked it. 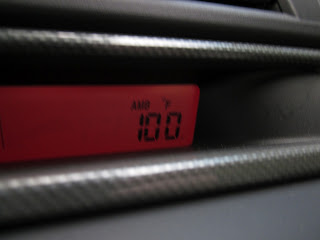 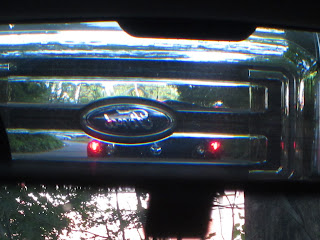 I know, weird to figure out. This is a photo in my rear view mirror, so it shows the front of the truck behind me. His grill was so shiny, I could clearly see the back of my own car, not a view I normally see. It comforted me because last week, over and over, I was behind cars with one or two brake lights out. It was nice to see from this that I wasn't being a hypocrite as I was aggravated by them. 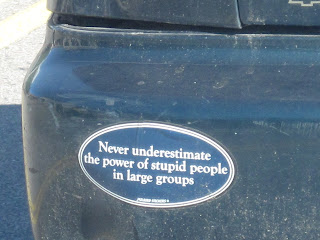 One of my co-workers had this on his desk. 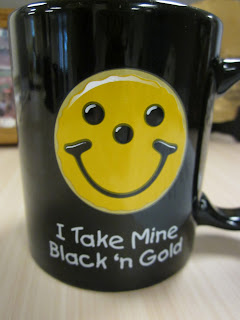 He just moved here from Wisconsin or somewhere, so he isn't a Bruins fan, but I can pretend, right? 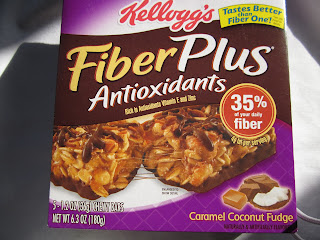 Did I tell you about these? Someone else told me about them: they taste like the Samoas Girl Scout cookies. No, really. Try them. This has been a public service announcement.
Posted by ccr in MA at 12:42 PM

Senior Cat used to cross her forepaws like the way Carlos has his! We figured it was part of her air of superiority, but maybe it's an orange-and-white cat thing.

I think you might be getting the bad weather they told us we were going to get in Philly. The radar map looked pretty brutal in New England this morning.

I'd be willing to test some cinnamon K-cups. I can trade you for Kahlua coffee, iced tea, iced coffee, decaf. . .