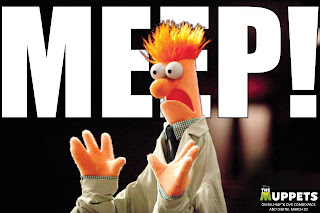 When I was unemployed, I kind of missed that Friday-night-feeling of relief, but it came back fast. Whew! Survived another week! This one has been hot, which of course I love, and humid, which I don't love but am okay with, but it came on so suddenly I wasn't really prepared. Let's just admit that the flannel sheets should have come off the bed earlier.

Honestly, it just hasn't been staying warm at night until this week. Last week I still had the heated mattress pad turned on; I didn't need it, but it felt good. Now I wake up sweating without it. Quick change.

Having changed the sheets tonight, I took the opportunity to take some pictures there. Not the best light, but at least you can see proof that I did finish two socks. 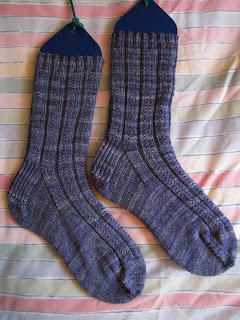 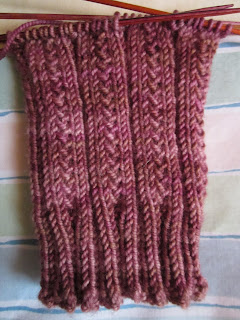 I also wanted to show just why I have trouble deciding which sock yarn is up next. 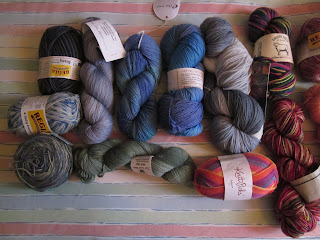 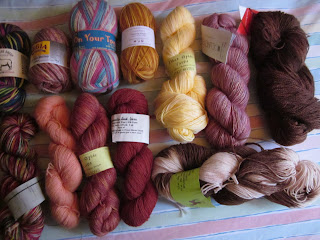 A. That's a lot of yarn.
B. Yes, that's just the sock yarn.
C. Pulling it all out reminded me why I bought what I did. So soft! So pretty!
D. As I was taking pictures, the thought crossed my mind to hope that no one who might be thinking of getting me sock yarn (not that anyone is, as far as I know) would take these photos as evidence that they shouldn't. You can't have too much! I'm nowhere near SABLE*!
*Stash Acquisition Beyond Life Expectancy, meaning more yarn than you could knit in the rest of your life. I've made almost this many socks already, and that's in less than six years.

So yeah. Make of that what you will.

I'm working on a great long write-up All About Work. Look for that soon. And knitting Olympics ideas! And Patrice Bergeron winning a major award! And the Bruins schedule is out, though there might be another lockout! And Doctor Who! And ... and ... and ... I think I need to go chill out now. I've got peas that aren't going to shell themselves here (though wouldn't it be something if they did?). What a pea season; this is my sixth batch this year, not of California's or New Jersey's, but local. Mmmmmmm.
Posted by ccr in MA at 6:42 PM

Where do you buy your peas? I need some!