So, time to write about the job in a bit more detail than I've managed so far! Seriously, the adjustment to working again has been huge. Getting back into the routines is not easy, and I require my routines to function. A perfectly timed quote via the Happiness Project:

Some of the specifics I've been adjusting to: 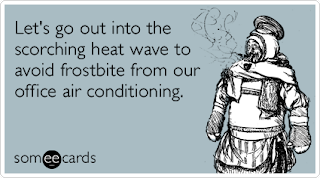 Commute
Off-rush hour, the drive takes 20 minutes. During rush hour, it's another story, and has varied tremendously. Twenty-five minutes, over an hour, there's no predicting. It's a challenge! A complicating factor is that close to my town, there's been a traffic shift that results in literally twice the traffic going down the street I usually go home. Of course, the night last week when there was an accident there, it was far worse: 15 minutes to go under half a mile is pretty painful. There are not a lot of options that make any kind of sense, but I'm going to have to experiment, because it's been nuts there. Adding to my personal frustration is how close to home it is: I'm almost there, but not quite. Honestly, though, I could have just about walked in the time (though not carrying the groceries).
As a side note, one of my new co-workers actually lives a few blocks from me. I'm not suggesting car-pooling, as he usually works earlier than I do, and I rarely drive home without stopping for at least one errand, but I'm thinking we could help each other out when one of us has car trouble. Could be handy!

Location
The company is not that far from the job I left 2 years ago (remember the psycho SVP and his mind games?), in an area full of stores and restaurants, and one that I am very familiar with. It's handy not to have to learn my way around, but simply to know where things are. This also helps with the commute, because if the highways are too bad to even try, I know a million ways to go. They may be just as busy, but at least you get to move, and have the illusion of progress, which is sometimes just what I want.

Office Layout
Outside: We are in an office park, but it's one with a lot of grass, flowers, and trees, which I really like. It's a good set-up for walking at lunch, when the weather is neither rainforest nor inferno. Our building is on the edge and our office faces trees, which are pleasant to look at, and provide some shade. It could be a lot worse! There's a cafeteria in a nearby building, and apparently a health club too; I have yet to check that out.
Inside: The office itself is one large room, with a few offices and conference rooms, and a small kitchen, on the periphery. I'm not a big fan of open seating, and this is very open: cubes in blocks of four, with walls low enough to see over while sitting, and they don't even go all the way to the center, so there's a lot of view-through. That probably doesn't help you understand, does it? Well, picture a plus sign (you know,+) and imagine a person sitting in each of the four corners. Then imagine that at the center of the plus, the lines don't meet. Like this:
|
--  --
|
So if you're sitting in the lower right, you can see diagonally through to the person in the upper left. Also, one of the side walls in each square is split, with a foot-wide opening in the middle, so you can see one of your neighbors completely. It would be great if you were collaborating on something, but since I'm not ... I just like a little privacy to blow my nose unobserved, you know? They're such odd little cubes. (I hope they were cheap, since that's the only excuse I can think of for getting them.) Another weird feature is that the walls aren't made of the usual fabric that you can use pushpins or cube-wall-hangers in; neither are they magnetic. Post-It notes stick to them, or you can tape things to them, and you can tuck things into the bottom edge and they kind of stay, but that's it.
Sometimes the open-ness is fine; there are times when the only sounds in the office are the clicks-and-whirls of computer use, and the hum of the air conditioning. Other times, there can be three serious-science conversations happening around me at once, whoa. It is odd to be the English major is a crowd of mostly scientists. There are times when their talk to each other sounds to me like the adults in the Charlie Brown cartoons: waah waah waah, waah waah waah, waah waah. Apparently the idea of a candidate having two PhDs but both in physical chemistry is sort of ridiculous? Who knew.

People
That said, the people are all nice. There are currently 11 of us in this office (and more in the division elsewhere), but it's about to be 10 because one guy got an offer too good to refuse from his old company. (Which is too bad, he's a fun guy and I liked working with him so far, but oh well. Pity his wife: they just moved from California to be here in March, and now are moving to New York. Ouch.) Back to the office: they're still hiring, so the numbers should go up, while hopefully the general niceness level will remain high; everyone seems motivated to hire the right people, so I'm not too worried. We have desk space enough for 20, and room for more; it will be interesting to see where we are in a few months. They're looking for another editor, and I really hope I like him or her. So far, though, I haven't even heard if they've found any candidates for it.

Work
Oh, right, the actual work! Yes, there is some of that. It seems to be going well. I may not love working again, but this is the right work for me to be doing (until I win the lottery). Another quote:


“The test of a vocation is the love of the drudgery it involves.”
-Logan Pearsall Smith

And when we talk about proofing and editing, I don't consider it drudgery. It can be tiresome, correcting someone's repeated mistake, but the thrill of eliminating errors and making something better, more readable, consistent, well, this makes me give a happy sigh.
My first week, I was given the Editorial Guide that the writers are supposed to use, and that the editors use to check their work, and then a test to take--open book, so to speak. I pretty much aced it, which was comforting, and I also found an error in the guide, where it says in a certain instance, do A, then shows an example which doesn't do A. So I impressed the editorial manager, who isn't actually my manager (the editors so far are in London, and they're not just for our division), but it doesn't hurt. The guide actually needs a lot of work*, and I'm meeting with my manager on Monday to discuss how much latitude I have with it.
*Call me crazy, but since the guide explicitly states to write in American English, I think the guide itself should also be in American English. No "spelt", no "exclamation marks" or "full stops", and exactly what does "at a push" mean anyway?

In closing, I just want to say that proofing spacing in justified text sucks. Justification throws off my eye for spacing.

The Start-Up Mentality
Although this company is not brand new, the division is pretty new (less than 2 years, I believe), and the office only opened a few months ago. The boss picks up coffee when she goes to Costco. My first week, I was surprised to hear someone asking around for "the" stapler. (How many people will there have to be before we get two, I wonder?) Meanwhile, my desk didn't even have a trash can. I could have asked for one, but when I was at Target I picked up a small bucket-like thing from the dollar area, that works just fine.

The Water. Yes, the Water.
I drink a lot of water. I'm not a water snob; at home, I happily drink tap water, no extra filtration required. But the setup here has me looking for workarounds already. There is a little side faucet on the sink to dispense filtered water. I tried the tap water itself, since sometimes that's perfectly fine, but it does taste unpleasant, so okay, I decided, I'll use the little one.
Well. It is slow. And by slow, here is what I mean:
*Because the water is slightly flat-tasting, and comes out just above room temperature, so it's better when iced.
Thirty seconds doesn't sound like a long time, but it feels like it, ten* times a day (plus refilling the ice cube trays). It's long enough that I zone out, then panic that wait, I was filling the glass, it will overflow! But no, it isn't full yet.
*That's an estimate, but I do drink a lot of water. And yes, that does require a lot of bathroom breaks. It's good to get up from the desk regularly.
So when I was at the grocery store Thursday night, I picked up a gallon of store-brand spring water (for 50 cents), and brought it in Friday (and almost finished it by the end of the day, I told you I drink a lot of water). The idea is that if I fill it at home* and bring it in, I will spend less time than I was before, and my drink will taste better (and my arms will even get some regular exercise, oof, have you carried a gallon of water lately?). We'll see how that goes. If it works out, I may have to get a larger tote bag, because the one I use now is big enough for lunch/snacks, purse, and book, but not for a gallon of water too.
*Where, by  the way, it takes less time to fill the gallon than it does to fill one glass at work.

Other Things I Appreciate
Things I Don't Like As Much
And that's the new job, three weeks in. Now you know!