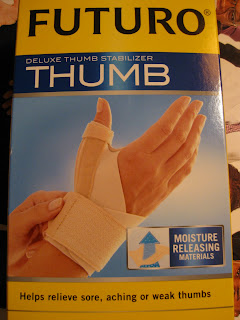 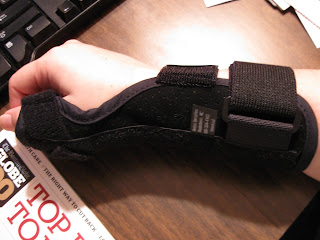 The staple-removing project has me quite bored, but also irritated (see, I can multi-task). It involves scanning stacks of old records, so what I'm spending most of my time doing is: un-staple pages, take them to copier, scan them, return to desk, open e-mail, open pdf, check pages, save pdf, re-staple pages. Repeat.* Sometimes the copier breaks a batch into 2 groups, and I have to insert pages to get them into one document. Riveting, right?

*When I was a kid, there was a sign on our fridge that said, "For this I spent four years in college?" I didn't get it then.

Yet hear me complain when the copier suddenly throws me a curve, and takes my 8-page batch and e-mails me a TIFF of the first page, instead of a PDF of all 8 pages. WTF?

Also, when you are using the scanner All Day Long, you get angry out of all proportion at the people who take print-outs from the tray and leave what isn't theirs on top of the printer, instead of putting the paper in the hanging basket six inches from the top of the printer. Thank you for leaving that special task for me!

Oh, one more bullet point:
Let's end on a happier note than that. Have a toe pic! 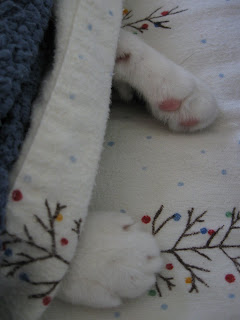 ohhh- you put your flannel sheets on already? I'm holding out for December!

Your sarcasm made me laugh this morning, thanks. I am really hoping you're among the 90% who are cured by that terrible shot. That sure is one serious splint - how can you cook?

I used to hate people doing that "I'm too special to take care of things that aren't mine" routine at the copier/printer too. The other peeve? People who (1)leave the copier with no paper, deferring making their remaining copies until later or (2) people who will put more paper in but don't move the guide gates to fully closed thus causing a jam.

Love the toes, love the flannel sheets... as for the shot? Yup. They hurt like the beejeezus.

They usually work for a couple months. After six weeks you might want to see if there's physical therapy included... think of it as a special Christmas present when your mom will be there to kiss it an make it better (g).