Mostly Yarn (a LOT of yarn), plus a bonus 6-foot-nine rabbit

I am struggling with Blogger's new interface tonight. It may actually be easier to use than the old one, once I know what works differently than the old one, but apparently the only way to find that out is trial and error. It's like they're saying, "Hey, you know that thing we did for years that was totally annoying, but that you totally got used to working around? Well, we fixed it! Oh, did you do it the old way? Yeah, that won't work the way you expect it to." Thanks, Blogger, my life isn't challenging enough these days? I just want to post pictures of yarn!

Yes, that's right, it's yarn haul photo time! One of the things I did on Sunday was take pictures of all the lovely, lovely yarn that October has brought me. And there's a lot of it!

First, my darling brother sent me some yarn from SF for my birthday. Hooray for colorful Californian yarn! 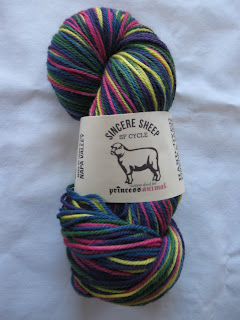 The maker (of whom I had not previously heard) is Sincere Sheep, and the type is Castro. See? Pretty! It has a good strong-but-not-rough feel to it. 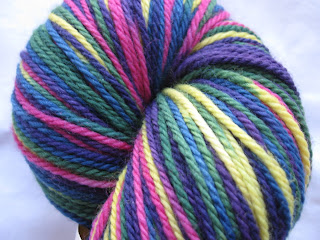 And there was the yarn that my aunt bought me at Apple Festival. It's from the same place as the yarn I'm currently knitting. Mmm, alpaca! 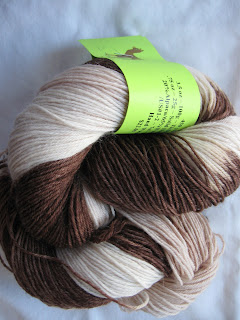 And wool and nylon. Soooo soft.

This one comes with a solid bit for the heel and toe. That will be a new thing to try; the logistics may take some figuring. 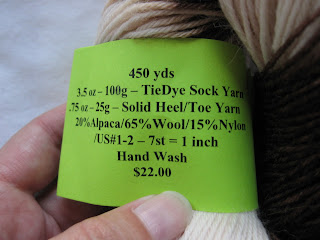 She also got me, if you'll forgive my stepping off the yarn boat briefly, this nice wooden bowl I was lingering over. It's been kind of hard to get a good picture of it! 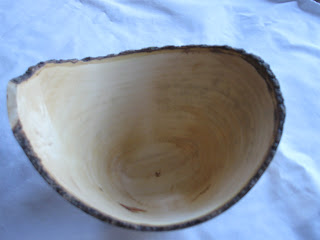 This is what it's been doing since it got here: sitting on the kitchen table, holding a skein of new yarn for me to admire. 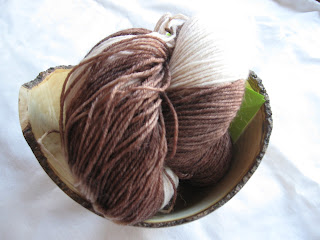 This one is totally out of place, but since I also got it at Apple Festival, in it goes. 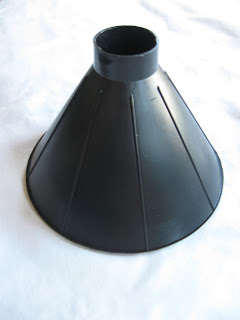 A funnel, you ask? No, but probably inspired by one. It's for the dread upcoming season: it's an ice scraper for the windshield. 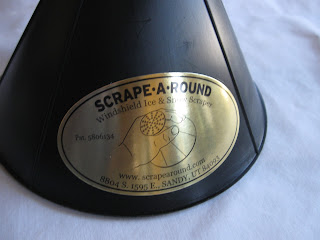 It even comes with a top that tackles the messier parts. 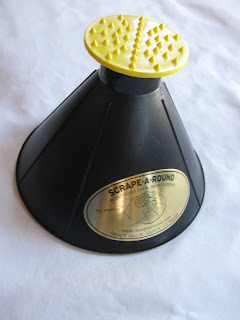 If you find it puzzling or intriguing, check out the video.

If you live in Florida or somewhere else that doesn't need ice scrapers, kindly keep your smirking to yourself!

Sorry. The trees are starting to look bare. I'm not excited for November and what follows.

{shake} Sorry! Back to the pictures! And, actually, on to Rhinebeck!

One non-yarny thing, which smells delicious! I know goats can provide fiber as well as milk that can become soap, but it does kind of perplex me how much more soap than goat fiber I see at Rhinebeck. It doesn't bother me, but it perplexes me. 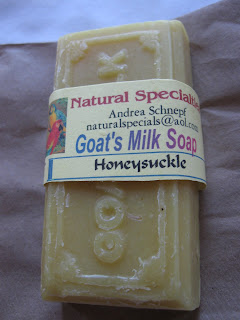 Now, this next part is not yarn, but you'd have to call it yarn-related. Some good new buttons: 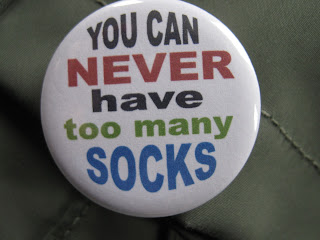 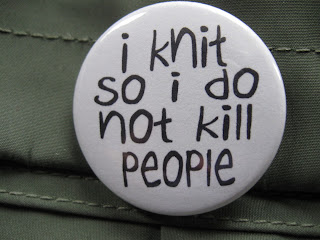 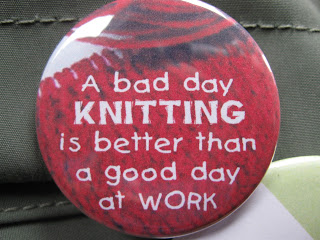 All right, here's the yarn: 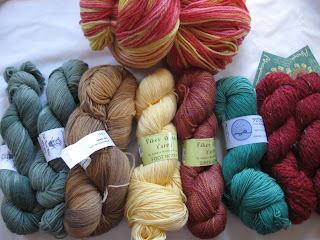 Oh, right, you can't pick it up and hug it when you need a little lift. Sorry about that. Feel free to come over some time and dive into the stash with me.

First, and not in order of buying but I figure who cares about that, is what my grandmother got me for my birthday (she slipped me a little yarn money the previous weekend). 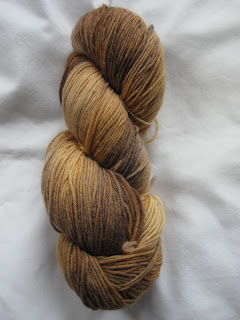 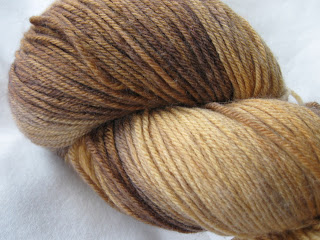 Perhaps you aren't bowled over by the understated colors? Well, you're really going to have to come over and touch this yarn. See? 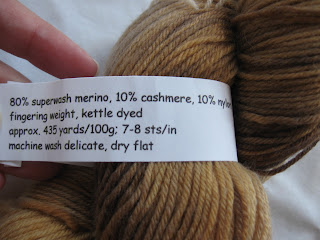 Cashmere! So, so soft. Whoof. I picked it up and couldn't put it down. It just wanted to come home with me. How could I say no?

You may recall, if you are memorizing all my yarn habits and actions (and if not why not?), that the yellow-gold socks I recently completed were from yarn I got at Rhinebeck in 2009, from a maker called Fiber Optic. They were selling it at The Fold, the booth where I got my first Socks That Rock, and it took me this long to use it, but I really liked it, both the way it felt to work with and the finished socks (which are on my feet even now, what a coincidence). When I went back to The Fold this time, I looked for more, but although they had some of her fiber, I saw no yarn. Then in the next building, there she was! Her own booth!

So I got another skein of Foot Notes (and another yellow one, but I swear it's a really different yellow)(yes, I know how that sounds), and I also got a skein of Siren Song. Because who could resist that? 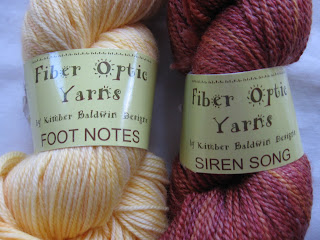 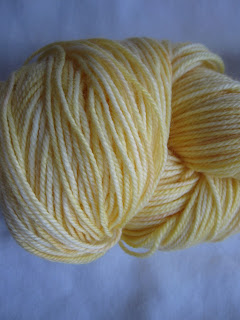 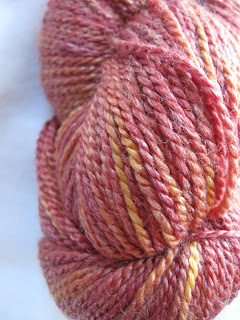 Which is part seacell! Interesting. 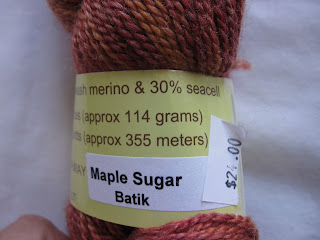 At The Fold, I did manage to limit myself to one skein of the beloved STR. Knowing that Webs sells it if I need more before next Rhinebeck helps.

A lovely green. On my monitor, this looks a little teal, but it's more between grass and Kelly green in person. 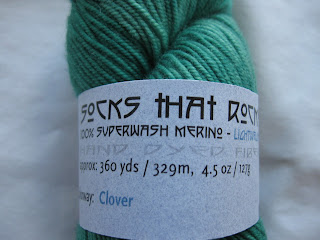 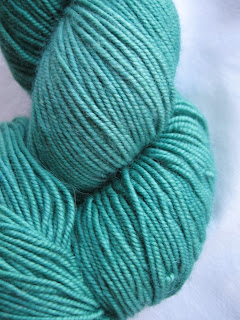 Then I felt like I had to try something different, so here's, yes, more sock yarn. Nice wooly soft Canadian yarn from Shelridge Farms. I'll report on it, someday, when it gets on the needles. More of a soft pine green. 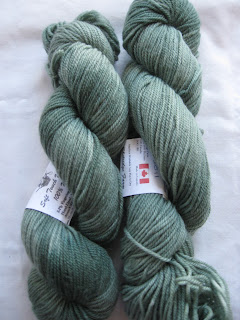 This one is (gasp) not sock yarn! It does have an intended purpose, but since Christmas is involved, no details just yet. Super soft! 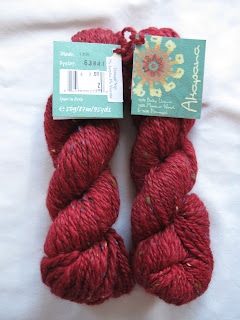 Now, the final purchase was another repeat. I got the red Blue Face Leicester from Maple Creek Farm last year, used it to make the Frost Diamonds shawl, and loved it. 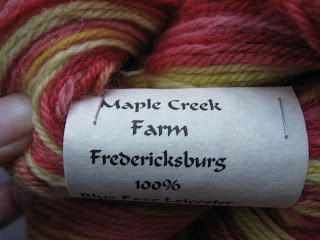 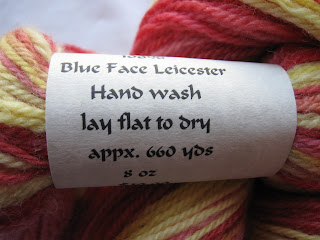 I was going to get a more, ahem, sedate color, but this is what I grabbed twice as I was going around and around the BFL display. Clearly meant to be. 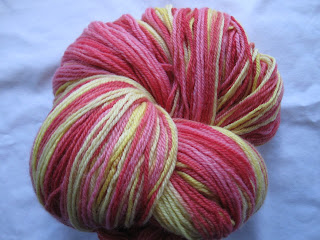 Meant to be what, I don't know yet. All will be clear in time. 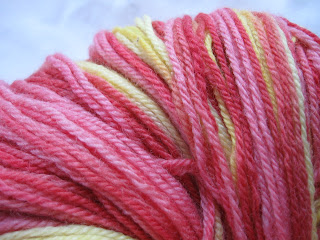 Now, if you've made it through all this, you deserve a further reward. So here, hot off the presses, is a picture of some of the Bruins making a Halloween-themed visit to Children's Hospital. Can you believe this? 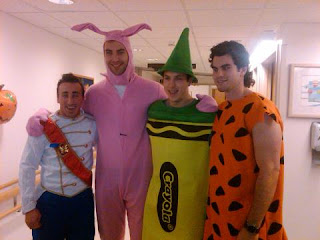 Thanks, Big Bad Blog, for sharing!

Loving the yarn choices! (Maybe goats are easier to milk than brush for hair to make into yarn?) And yes, I am intrigued by the ice scraper. That might be a family Christmas present idea.