Home Again, and Update on the Latest Socks

The current weather forecast only has a 20% chance of precipitation today, but the sky has that leaden look that makes me think I may be in that twenty percent. It's a good day to stay in, I guess, and I've been doing laundry and unpacking and putting clean dishes away. This afternoon is the NHL All-Star Game, and I want to be on the couch with knitting and probably a cat and have a fairly clear conscience.

Not that the All-Star Game is the biggest deal to me. I've always enjoyed the skills competition more, and I watched that cheerfully last night with Carlos' company. (Nothing quite like feeling the purr through your hand, where the cat is resting his chin. He can purr in his sleep, what a clever boy.) The skills are impressive, the players clearly having fun, and it's worth sitting through the sometimes-sycophantic interviewers to see the ups and downs. Chara beat his own record on the hardest shot, hitting 105.9 MPH, which is crazy. And this year they put goalies in the fastest skating contest, which was pretty funny. I had to imagine the Bruins management flinching when Tim Thomas fell on a turn, but he didn't hit the boards, got up and kept going, still laughing as always. It was fun, while the game itself tends to be high-scoring, no-hitting, and too polite for a hockey game. Still, it's better than no hockey at all, and I have to have it on.

For knitting I may start a new project, or I may continue the latest sock. No, not the ones I've been showing you: as of Friday, my Skyp socks in the Socks That Rock Lightweight yarn are done. In five weeks! Woo!

You may recall that I finished sock number one at my stitch and bitch group two weeks ago. I took some on-the-foot pictures in Florida: 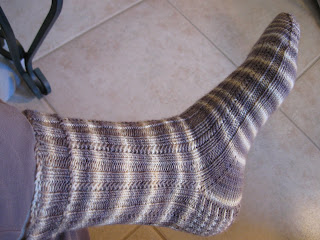 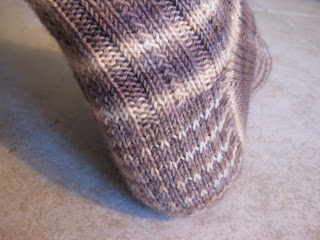 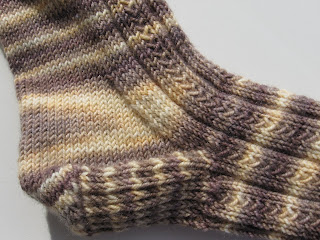 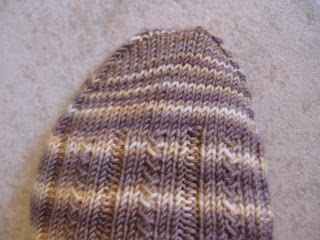 I'm very pleased with how it turned out, and have enjoyed working with the Lightweight as much as I did the Mediumweight.

So, of course I immediately started sock two, in order to have it ready for my travel down to Florida. Here it is in the airport, just a couple of rounds done: 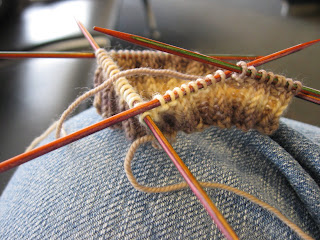 Here it is on the plane, enjoying sunshine after the storm passed, getting ready for takeoff: 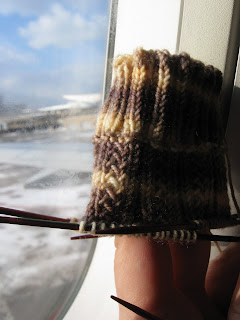 And here it is in Florida, showing a decent amount accomplished in a day: 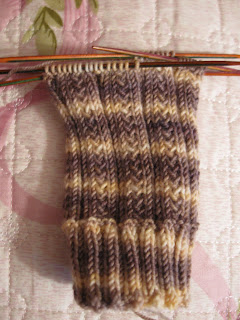 Next to number one, for perspective: 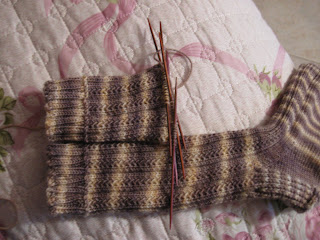 I worked on it during the week, as well, watching TV and so on, and by Thursday morning was here: 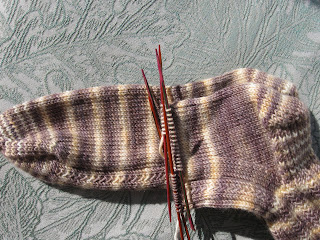 I considered the remaining amount, then took the yarn I had sensibly brought with me: 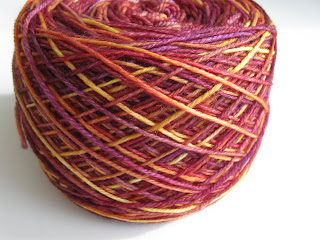 And cast it on, so that if I ran out of knitting, I wouldn't be stranded. (You know, with a book, audiobooks, and the seat-back TV and satellite radio ... but nothing to knit.) 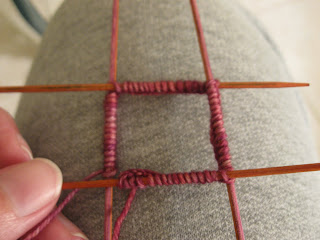 Which was fortunate, as there was still flying time left when I got to the end of sock two (I grafted the toe after I got home). 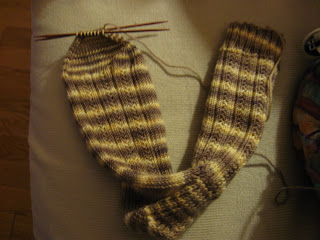 So it was good to have something else ready to knit, and I'm very happy with the latest pair. 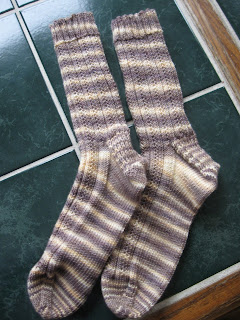 I'm planning to go to Webs sometime in the next month or two, with Grandma's Christmas money in hand, and I wouldn't be at all surprised if some more Socks That Rock comes home with me. No promises ... but I wouldn't be surprised.
Posted by ccr in MA at 2:42 PM

It is a little startling to see such high scores for hockey.