Another "swatch", and another quandry

Okay, I need to get to bed, but I was on the computer "just to do this one thing"* after I got in from dinner with friends (which: yum) (plus, fun and chat and what time is it? We've been here how long?), so I thought I'd show you what I did following the hat.

At first, in my "now what do I knit" quandary, I was thinking it would be fun to have a scarf that matched the hat. I even started another Ruffles scarf, because it's a pattern I enjoy (I think I've made three now, though only one for me).

After capturing that fun moment of Look, I made a triangle! 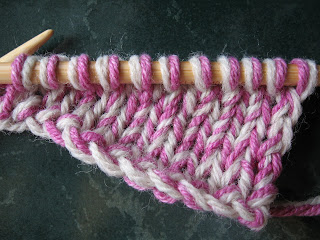 I frogged it (more of a tadpole, really). Too firm, not what I felt like knitting, I just wasn't feeling the love. With a vague idea of knitting a long tube and calling it a scarf, I cast on 42 stitches on a US size 17 circular needle, and started around.

As it progressed, I started to wonder if it would be big enough to go over my head, and thus might be a cowl-like object, instead of a scarf. It's an interesting feeling, wondering exactly what the thing you're knitting wants to be.

I decided that it might just work, so I got to what I thought was a good length and stopped. Today I took it off the needle and tried it on, voted yes, and put it back on the needle in order to bind off (which felt like walking backward to go forward, but it wasn't actually that time-consuming). I ended up with this: 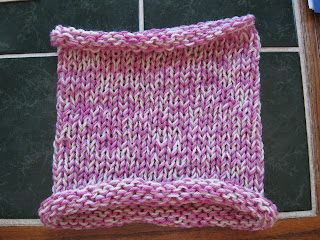 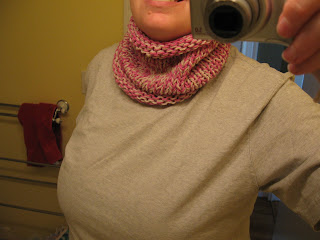 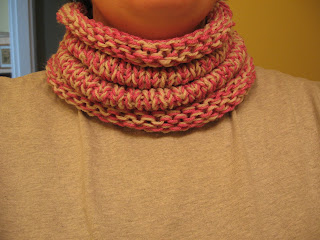 Me likes it. I wore it tonight, when it was feeling chilly, and it was good. I am happy.

And again, I don't know what to knit next. I must peruse the Ravelry link that Leslie sent; that is so cool, thanks Leslie!

Email ThisBlogThis!Share to TwitterShare to FacebookShare to Pinterest
Labels: knit

Very nice! I have a single skank of Malabrigo that's been sitting around for ages wondering what it wants to be. I think it just waved to me.