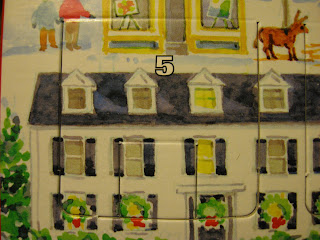 The Barque Sarah is a fairly basic chocolate, but that can be deceptive. Milk chocolate and almonds, so what, right? But mmm. Have one. I'm not even a big fan of almonds, but these slide right down.

**********
Since I've had other things on my mind lately, I haven't been complaining about the weather much lately, have I? Well, if we get the 2-5 inches of snow tonight that "they" think we might, expect some serious whining. For now it's just rain, but there's a Winter Weather Advisory and there's this: 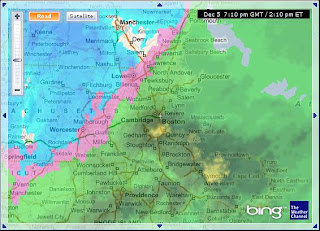 I went out for today's very-important-errand (the library), and now I'm officially In. For the day, for the weekend, it depends. I have a Christmas tree to decorate and various chores to take care of, interspersed with a cat who finds me sometimes scary yet strangely appealing. The Jekyll-and-Hyde thing can be a bit much, but at least she snuggles some of the time. (Still no lap, though.)

I definitely do not like how dark it is so early these days, but I have been enjoying the Christmas lights. I first saw some the week after Halloween, and so many people put theirs up over Thanksgiving weekend that they're everywhere now. Of course I like some more than others.

I mean, I can accept that people have different tastes. I can look at a tree covered with little white lights, and ornaments in just one or two colors, and honestly think, how lovely! Then I decorate my tree with colored lights, not outside-large but not the tiny ones (they're not just "like" the lights of my childhood trees, they are the very same strings). And bubble lights, and a few of the old snowball lights left yet. And all the odd ornaments from my childhood and since, which are no decorator's idea of any sort of scheme. I put on strands of ribbon loops, and candy canes and icicles. It's a big old Christmas mess and I wouldn't have it any other way. It's my tree.

Wait, wasn't I talking about outdoor lights? Whoops, small diversion there. My point is, I don't want everyone to decorate to my tastes, and I'm fine with that. (Except flashing lights. Those are bad, period. I'm a little visually sensitive.) But there are things that get my goat a little. (Surprised?)

Having red bulbs in the candle-in-the-window lights. I accept orange, though a yellow-orange looks more like flame and isn't that the point? But red ... I saw it a few times already this year, and it made me think, if vampires decorated for Christmas...

Or how about this, a sort of test of how obsessive you are. Say you had a handful of those large candy canes that you were going to put on either side of your walkway. Half were red and half were white. Would you:

a) alternate red and white on each side?
b) put red on one side and white on the other?
c) come up with some other balanced pattern?
d) insert them at total random and in an anti-pattern designed to make passers-by want to pull over and rearrange them?

I didn't pull over, nor was I really considering it. But if I lived next door to that, I would find it irritating.

How about you? Do you decorate outside? What do you like and what do you hate?
Posted by ccr in MA at 1:42 PM