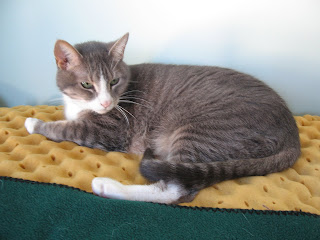 For the last few days, I've been more worried than usual about Pan. He's seemed a little less engaged than he was. Who would have thought I would miss the nagging to "sit down already so I can sleep on your lap"? He's not completely retreating: he'll sit near me, on the back of the couch or on the bed, and be purring, but it isn't the same. I woke last night and found him curled up with me, entwined, and was so happy, but today he's back to looking at me from a distance.

He's also stopped wanting to eat the Pill Pockets, which means I have to pop the pills in for him, and he doesn't fight it much but I still hate doing it. When he started doing this, I wondered if the last of the PPs were getting stale, but after the first one of the new package, he still doesn't want them. It's so worrying. I see him drinking water, and using the box, and getting in the shower to lick the walls (does that count as drinking, recreation, or both?), but I realized yesterday, I think it was, that I haven't noticed him eating recently. I'm sure he has (right?), just that I haven't noticed him doing it, but more worry. Today, I offered him some wet food as a treat (the boys are dry-only, always have been), and he sniffed it and looked at me like, so what? Harold came along later and was happy to have some.

For that matter, Harold has been extra-lappy over the last week or so. Weird coincidence. Thank heavens he sleeps a lot, because when he's awake he keeps coming to see if what I'm doing goes with having him on my lap. It's like he's lapping for two, so to speak. Weirder and weirder.

Email ThisBlogThis!Share to TwitterShare to FacebookShare to Pinterest
Labels: cats

Am beaming Kitty Health vibes at him through the aether.