An Evening with Franklin

I'm sorry to say that I didn't get any great photos of Franklin last night, and it wasn't even the intimidation factor of snapping pictures of a really good photographer. The issue was primarily that without the flash, there was blurry, and with the flash, the lighting looked decidedly odd. (That's my story and I'm sticking to it.)

Now, I grant you, at the Stata Center, it's not at all unlikely that the lighting would be odd. I mean, have you seen this building? 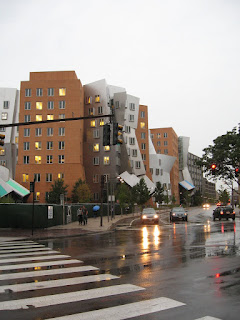 At least, if the lighting wasn't weird, it would be one of the few non-odd things about the surroundings--but in fact I was there, and the lighting was not noticeably weird. The chairs were a little close together for comfortable knitting (elbows, you know), but of course everyone* managed anyway, and the lighting was sufficient, and certainly better than the Yarn Harlot at the Calvin, so I guess MIT wins this round.

*Not literally everyone was knitting, although most were. A woman in the row behind me was quilting. I got to the heel on my second sea sock.

There were a few technical difficulties to delay the start, but of course a group of knitters can pass the time quite well, and there was a lot of project-gawping and love-your-sweatering and can-I-touch-your-yarn going on (that's the knitters handshake, after all). I had brought a scarf, since yesterday was chilly, and since it hasn't been scarf weather in so long, I'd forgotten how the Ruffles scarf is interesting to a knitting crowd. (I wore it to the Knit Out a couple of years ago when I was making it.) It was fun.

My favorite shot is this one, which is blurry, but not so blurry as to be immediately discarded. (After all, this is just a casual blog synopsis, not a professional review.) He was getting things set up, and looked up just as I took the photo. 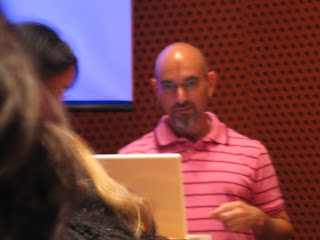 He probably wasn't looking at me and wondering how he had ended up in a room full of strangers who wanted to take his picture ... but maybe he was.

He had a whole presentation, starting with this cartoon (from the book, of course): 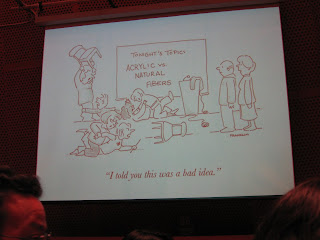 I thought he was a good speaker, and not as nervous as I would have been if I was invited to speak in front of "probably about ten people" and had to face a hundred or so. 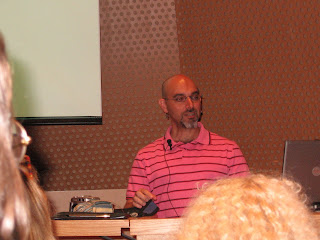 He talked about how he got started knitting, and about how the 1,000 Knitters Project came about, and how it's going (in short: well, very well). I particularly enjoyed the story of Debbie New* being actually unable to work on anything as simple as a row of 22 stitches of plain knitting.

*Non-knitters note: Debbie New is a knitting celebrity**. She knit a lace coracle (a boat) that actually floats. She knit a kaleidoscope. I think that she could knit anything, literally.

**Franklin noted that muggles (non-knitters) are often baffled by the use of the term "knitting celebrities"***. His impression of a bass fishing fan mocking the idea, and then recognizing "Bubba McSomething" on a fishing show, was hilarious.

***I saw Stitchy McYarnpants, still working on the crochet-edged beer cans for her friend's drag contest costume, and Jess from Ravelry, and a few other people I recognized.

When he talked about the 1,000 Knitters, he brought out the scarf: 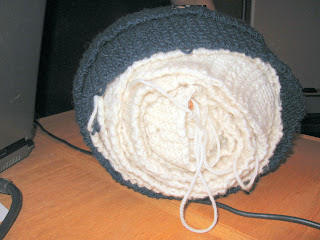 ... then bowled it down the center aisle. 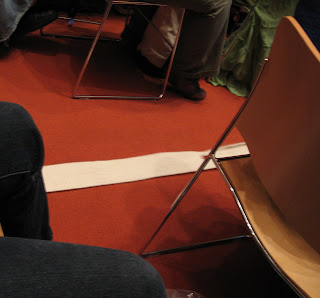 Rolling it back up, he talked about certain notable parts of the almost-finished object (bobbles, a hole, etcetera; I don't want to spoil the story). And no, he hasn't measured how long it is. 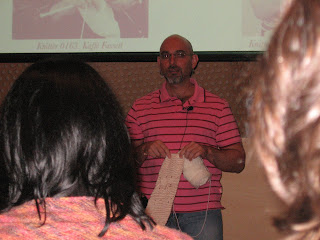 Franklin's sister came down from Maine for the event, and brought the fabulous shawl he made for Abigail, the one that caused the largest amount of drool in keyboards of 2007 (you remember, right? that wasn't just me?). It was amazing to see it in person. What gorgeous work. The man can knit! 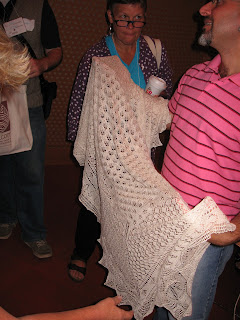 My overall favorite thing he said was when he called knitting, "the most beautiful form of procrastination". I need that on a t-shirt, okay? Someone? Thanks.

I'd only seen the Stata from the outside before. It's equally, ah, interesting from the inside.

A skylight showed the rain I could have done without. 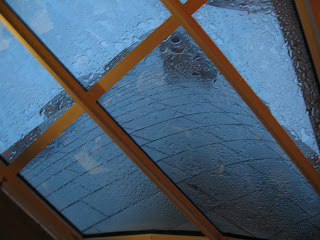 The room we were in had such an interesting ceiling. Maybe I hang around too many knitters, but I couldn't help wondering if something unexpected happened during construction, and the person in charge said, "Make it look like a star and call it a design element!" 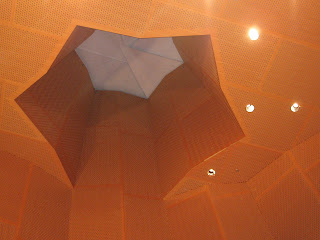 Through one window and across to ... a greenhouse? Or something? 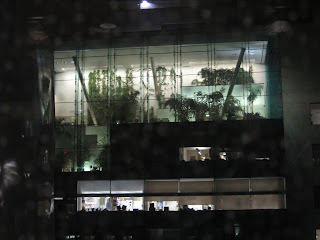 The question mark at the info desk is a great idea (and directional marker), even if yes, it looks like it was Photoshopped in. 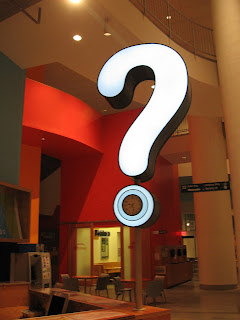 From the other side, though, it makes me say ¿Que? 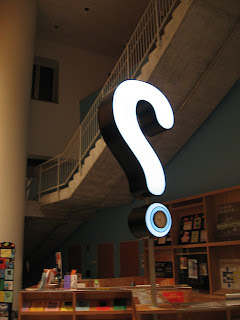 Next time, perhaps I will try to hang upside down from above, to get it that way. It's good to have goals. 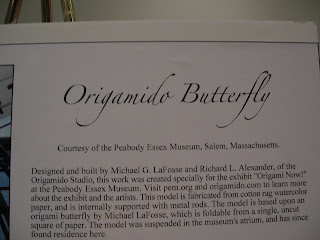 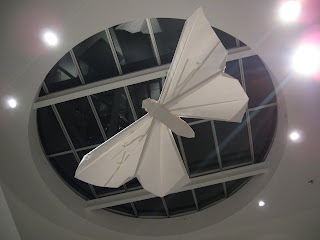 Lovely, yes? Although perhaps a bit more moth than butterfly. Still, I like it.
Posted by ccr in MA at 11:42 AM

Thank you for sharing your time with Franklin with us.

I have to agree with you about the lighting at the Calvin. It's definitely not a place for working on something requiring detail knitting.