A Small Step Back

I felt extra-tired today since the alarm went off, and because I'm also still a little congested, I think it's safe to attribute that to the lingering bits of The Cold That Never Ends (12 days after the first symptom, it seems the right name for it). I'm sure that everything I was doing the last couple of nights contributed, but I'll go to bed early tonight, and hope that helps. Whether it does or not, tomorrow is Friday. Ahh.

Tuesday night I was determined to go to the swim class, even if I didn't last through the whole hour. Not that I'm excited to exercise, exactly, but if I'm going to pay for this, I am going to get into the habit, damn it. I also really needed some groceries, having been sick so long, and since the grocery store with my bank in it was on the way to the gym, and I also needed to go to the bank (a check to deposit, plus needing quarters for laundry), I decided to suck it up and do both, even though I knew it was a lot to do when I was getting over the cold.

I did the banking and got some food, so that was good: more soup! On a side note, an example of how long I've been sick is that I've opened so many cans of soup that as of Tuesday, Carlos has given up on coming to check on me when I do. Previously, he has been convinced that All Cans Hold Tuna, always comes running to get his tuna water, and is always disappointed when that is not the case. Tuesday and today, he didn't even get off the bed.

Anyway, I went from the store to the gym, arriving about half an hour before the class, so I got in the pool and sort of moved around, not swimming laps but generally moving, anyway. I then made it through half the class before deciding that I'd better head for home. Man, was I tired when I got there! But a good night's sleep and I didn't feel worse on Wednesday--better, in fact, since the nagging headache of Mon-Tues was gone.

The company had its holiday dinner last night, which lasted from about 4 to 7. It was at a new-to-the-area restaurant near the office, and was actually quite nice. Although there were a few typos on the menu they made out for us! I was next to one of the other editors, and of course we noticed. As I said, it was possible that "houemade croutons" were a thing that I just hadn't heard of, but more likely they meant housemade, right? And in the dessert list, we discussed what the "Cannoli's" might possess, without coming to a conclusion. Good fun. It would have been nice to be able to talk to more people, but we were at one long table and it wasn't a moving-around kind of setup. Still, not bad. At least I wasn't near my boss.

When I left, I had enough psychic energy left to drop in at my alternate knitting group for an hour of secret Christmas knitting, before heading home to cautiously turn on the Bruins game (they were in Montreal, which gives a Bruins fan a bad feeling in recent years). It was a 1-0 Montreal lead in the second period, and I kept it on while settling in, talking to the baby, and so on. Rask was playing a really good game, but it wasn't until the third period that his teammates caught up to him. They actually ended up winning 3-1, much to my surprise, and it was an exciting enough finish that there was no way I was going to bed early and miss any.

So I didn't get enough sleep, and paid for it today; still, I can't regret my choices, as it was such a good evening overall. And I got some good cuddle time with his lordship, too. He felt that my being out of the house for around five hours required some consolation. I'm afraid he isn't going to enjoy my being away for a week! I get back Saturday night, JetBlue willing, and will make no plans for Sunday beyond my couch. 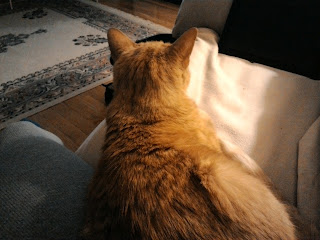