Wrapping up a good weekend (with yarn, and cats)

Ahh, what a nice weekend. Got lots of good sleep, the weather was fairly nice today and simply gorgeous* yesterday, and I did some knitting and some cat-cuddling and had the windows open and got the laundry caught up and generally it was good.

*I mean, for March, 70s and sunny is simply amazing. We get snow in April and even May some years. Spring isn't here to stay, but I love-love-love the sneak preview.

More secrets to keep from Grandma! I started with a bunny pattern that I abandoned after the body, winging the ears rather than deal with 6 stitches in the round thank you no thanks. He's a little odd looking, but still kind of cute. 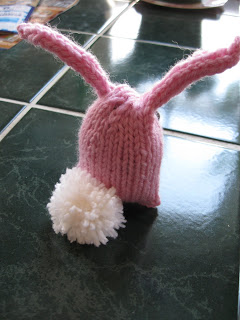 Love that tail! And this next little guy is an egg cozy. He'll go on a chocolate egg, of course. 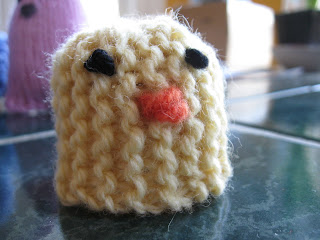 So here's the cast so far: 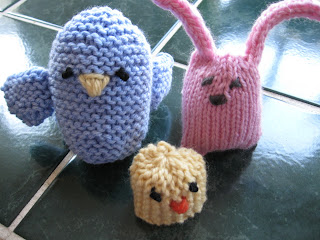 There was also a little stealth knitting, which will be revealed in time. And I'll probably troll Ravelry to find some other small simple thing to go with the group. One's grandmother doesn't turn 96 every year, so I want to make it a good basketful.

Then there were cats. The open windows yesterday unsettled Carlos a bit, and I don't know if that's why he spent several periods on my lap, since it could also be that I was around and he's relaxing and all, but whatever, I don't care, I loved it.

You can see he's been on my lap, right? Hopefully this is his Spring Shed, and at some point he'll stop trailing a cloud with every move. 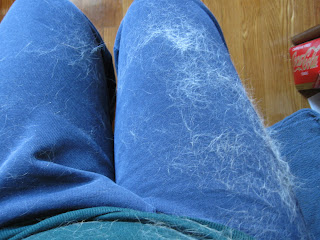 And it's worth it for this belly. 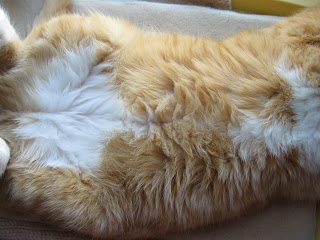 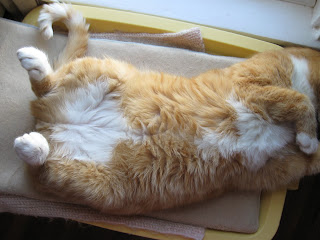 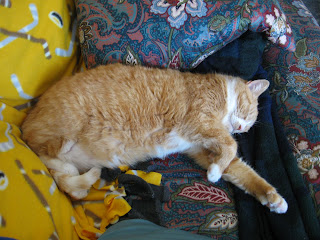 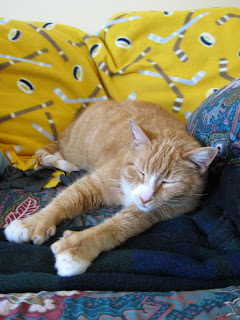 He's still not Miri's biggest fan when she gets too close, which happens because she is ready to be best friends and snuggled together. He doesn't mind her being around, though, so I think she'll win him over in time. 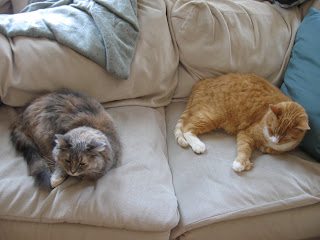 She didn't seem to mind the windows being open. 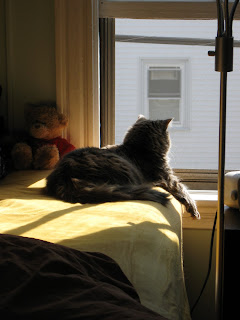 And I loved it myself. That fresh air, at the end of winter, is the most amazing thing.

I did apply for that job, by the way. I agree that a better job would be worth a pay cut; it's just that there is a point where making the mortgage would be difficult, so I have to balance possibilities. Hopefully they were more interested in the experienced part than the entry-level part. We'll see; I'll let you know if I hear anything, from anyone, about any job!

So now the weekend ends. Here's hoping that the coming week is kind to me. And to you, of course!
Posted by ccr in MA at 7:42 PM

Lovely tummy, Carlos! And nifty easter knitting, too. Could you post links to the patterns? TIA!

Oh my gosh, those bunny ears are hilarious.

I suspect Carlos won't snuggle with Miri because he's way too in love with you. I mean, all that shedding and belly-exposing isn't for nothing, y'know.

You applied for the job? Yay!