At the risk of overdoing it with the clock blogging lately, I noticed something on the box that I thought was pretty funny. The text there is in English and Spanish. On the English side, it boasts of the "No Power No Problem System": 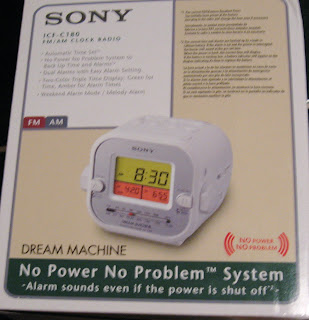 How do you suppose that translates? I mean, I studied French, I wouldn't begin to guess. (Not that I could translate it into French, either, before you ask.) So I turn the box: 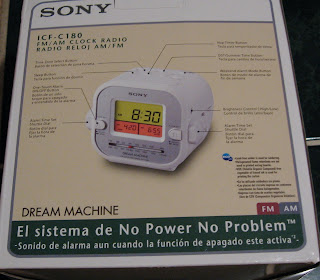 I had three small errands to run after work tonight: fuel the car (more expensive every week, isn't it?), return a library book, and pick up prescriptions at CVS. I only had to do the latter because I forgot to go after Stitch and Bitch last night. Guess what I forgot again tonight? I remembered it after the first two errands, but spaced out before actually going. It wasn't for anything I needed right away, fortunately, and while I could still go tonight, you notice I'm not. It's hard to get me to leave the house once I'm in. Besides, the cats need me. They don't like SnB nights, and the loss of several hours of attention. Harold is on my lap now, and Pan is giving him the eye.

Sure enough: "Meow!" from the other room. CVS can wait until tomorrow.
Posted by ccr in MA at 6:42 PM

Hey, I'm glad you blogged more about the clock - I got the model # off the pix and found out where I can get one! Hee.

And I'm with ya on the picking up scrips. Why is that such a pain in the neck? I put it off as long as possible every month, LOL. (Sending extra kitty lovin' from the left coast.)