Socks, Sweaters, and No Regrets

Well, I regret that it snowed today. But no regrets about yesterday!

Nope, not a bit. In summary:

I spent more money than I planned to.

I bought more yarn than I thought I would. (Duh ... A plus B equals no shit, Sherlock.)

And I keep looking at it and smiling. 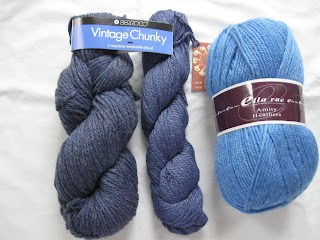 Yes, all blue*. Yes, I know that seems odd. No, I've never made a sweater for an adult, just a vest. I don't care. I love them all.

*I also bought one non-yarn item, highlighter tape. In blue. Years from now, we will call this my blue period.

I planned to buy a skein of sock yarn, and I bought three: 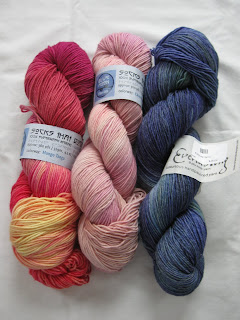 And I'm happy about it. So happy!

To step back to the beginning, yesterday morning I cleaned some snow off the car (honestly, winter, stop it already) and headed off to the shop to pick up the loaner car. I was sitting at a red light when I thought I heard music coming faintly from somewhere, and it took me a minute of "but the radio isn't on..." before I realized that this was coming from my cell phone, tucked away in my purse and with the volume on low. (Did you think I was exaggerating when I said that I don't use my cell phone much?)

I got nervous when I saw the call was from the town where the shop is, but it turned out to be a different person than I talked to Friday night, letting me know that the loaner was there for me. Whew! I told him that I was on my way over, and when I got there he had it running to warm up, and cleared the snow off and everything. Whew, whew!

The car was a Toyota Camry sedan, not at all luxurious but decidedly functional, which is what mattered. I headed out to Central MA with more confidence than I'd had in tires for a few days. The drive out was fine, and while I got slightly turned around at the end, I found my friend's house without much trouble*, and we jumped up and down a little with excitement.

*Only two wrong turns, small and easily corrected. No problem!

I said hi to her husband and kids, she showed me the house, I paid for my Girl Scout cookies and showed off my knits-in-progress and my new t-shirt: 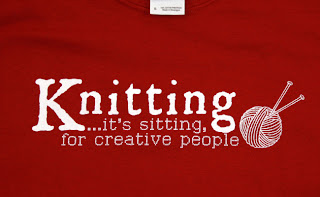 All good, and we hadn't even left yet!

We did leave eventually, of course, and headed toward Northampton, home of Webs. Listen: did you hear the angels singing? Just me? Moving on, then.

*Actually, I really thought I had been twice. But I only see that I blogged about it the once, and I'm absolutely positive that I would have written about it. The Yarn Harlot trip was my first, and apparently this was my second!

We had talked of stopping for lunch before going to the store, but the car took us straight there. We walked around for a while, taking it all in, getting high on yarn fumes, then left to get lunch and breath yarn-free air, come down to earth somewhat. After some lunch and a little chocolate, we headed back prepared to dive in.

My first stop was the Socks That Rock, since Webs is my only in-person purchasing option between Rhinebeck and Rhinebeck. When we went in before lunch, I found it and fell in love with two skeins at once. There was plenty, so I put it back before we left (rather than asking them to hold it for me, that is). When we returned (only an hour later), one of my choices was down from three skeins in stock to one! I grabbed it and hyperventilated a bit. That was close! Lesson learned: do not treat the STR lightly next time. You love the yarn, you want the yarn, buy the yarn. 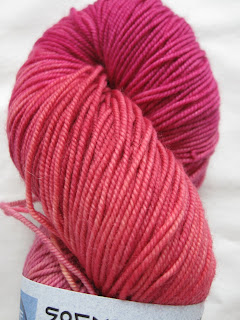 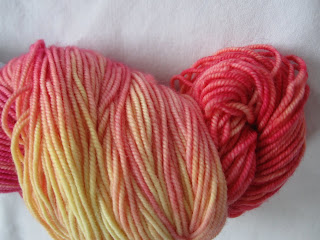 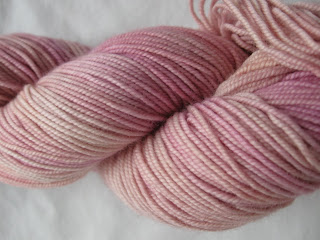 Isn't that yummy? There were so many sock yarns that I wanted. The other one I got was this, from Dream in Color (remember the socks I made from their Smooshy yarn?). 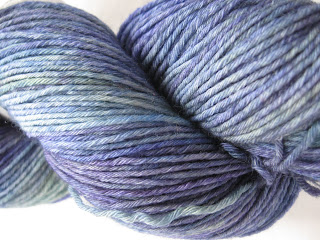 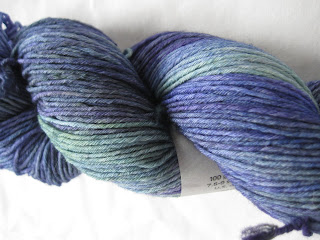 They call the colorway Morning Glory, but my friend and I decided that it should be Mermaid instead.

There were so many interesting bags and tools to look at. Rosewood needles or ebony? I like this style of bag, but that fabric. So many crazy fibers to touch; I mean, sugar cane? How often do you get to knit with that? 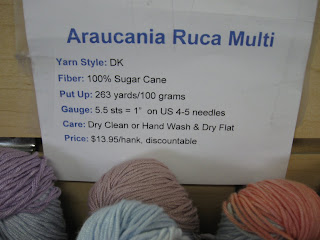 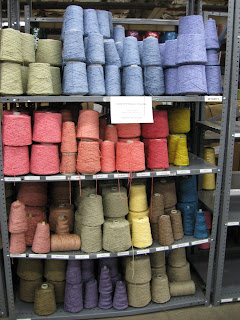 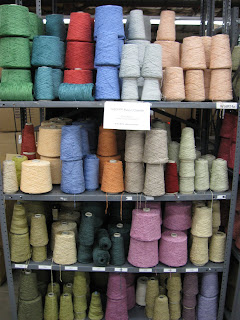 The softness! You can't imagine how soft this was. 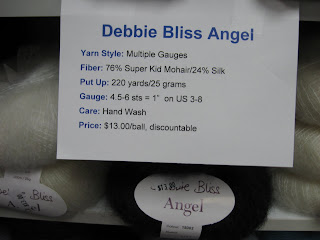 And this? The ... luminosity struck me dumb. 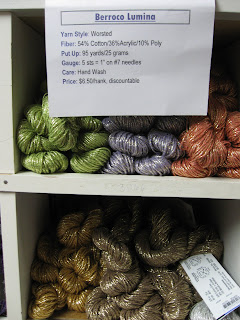 I can't think what that feels like to work with. Or what you would make with it.

So, yeah. I got a little carried away. With the amazing prices, it felt perfectly reasonable to buy a sweater's worth of Ella Rae Amity (75% acrylic, 25% wool), when I don't know which sweater yet. (Maybe this one, which I've had my eye on for a while.)(This is the yarn I used for the sweaters for my friend's twins, incidentally.) 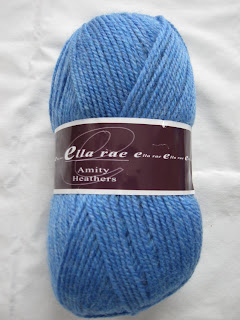 This one, on the other hand, was actually bought with a purpose in mind. Berroco Vintage Chunky, 50/40/10 acrylic/wool/nylon. 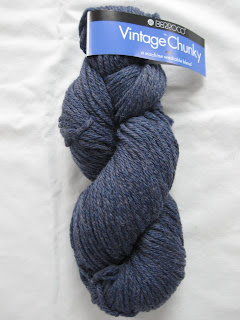 I saw the Forward Pullover in the new Webs catalog and really liked it. I checked out the recommended yarn, but didn't fall in love with either the feel or the colors. Neither was bad, just ... I wasn't feeling drawn to it. So I checked for other yarns in a similar weight, and bing! 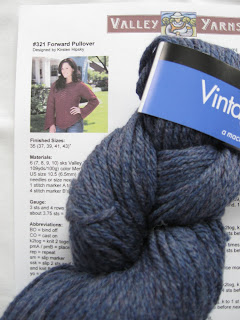 The yarn feels soft, yet hefty, solid somehow ... can't wait. I think I will wait, until I finish Frost Diamonds, but not much longer! 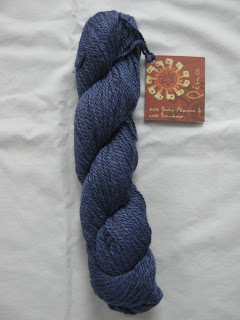 It was on sale, at a really good price. It's soooooo soft. It feels wonderful. I love the color.

And I think I was a little yarn-drunk. It's the truth. That's the last thing I picked up, and I just couldn't stop myself.

Perhaps the funniest* thing was that, as both of us wandered through the store picking things up, putting some back, picking up more ... we ended up spending almost the exact same amount of money. I think we were $7 apart. We couldn't have done that if we were trying to.

*That must have been why we kept giggling, after we left, right? Because it was funny!

What a great day.

I heart your tee shirt. LOVERLY yarn!! I missed a big sale, didn't I?

Wow, what a great haul!

Check out all that yarn!!! I love the China Rose. And all the blue stuff.

And by coincidence, my mom got me a beginner's guide to knitting (bargain table at B&N). Guess I have to get started. . .

It was a wonderful time, I've never had so much fun giggling.
I still LOVE that shirt!