Saturday Not To Plan: Mostly Terrible, But Some Very Good Spots

I didn't have a particularly detailed plan in mind for Saturday, but certainly waking up with a migraine that went from bad to worse in a hurry was nothing I wanted to happen. From about 6 until 2:30, I was: in a blur of restless motion, dozing, saying ow-ow-ow, and had a few bouts of vomiting (so much fun once you've thrown up everything in your system and your body keeps trying). Yeah, it was miserable.

At some point, after taking nausea medicine, I decided to trust my stomach to keep the headache medicine down, and after some more dozing woke up having turned the corner. Whereas an hour earlier, I had been trying to come up with something, anything, that I could stand to eat or drink, and rejecting even the simplest idea of saltines or ginger ale, I got up saying, oh, scrambled eggs, I could do that! And they were amazing, I have to say. The headache hangover isn't, of itself, a good feeling, but compared to what it follows, wow, it's amazing!

So I ate my scrambled eggs, and rejoiced in being able to bear sitting up, and then turned on the NHL Network to find they were playing, of all things, a Bruins game! It was great.

And then! The mail brought me an order I placed last week, to support an LYS and one of my favorite small dyers, Three Irish Girls: 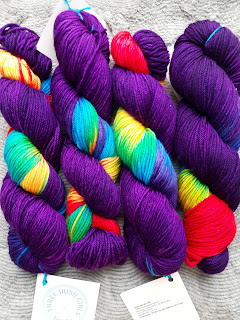 Isn't it glorious? The colorway is called Pride (in the Name of Love). 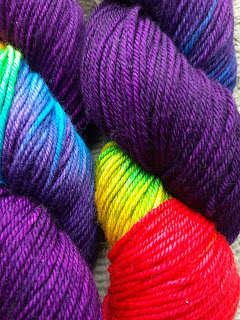 The blanket I finished last year, that's the background for so many Maggie-lap photos, is made of Springvale Worsted, and this is the DK, which is slightly lighter weight (205 yards to 100 grams with worsted, versus 270 yards for the DK). I want to make a longer, narrower version of the same blanket, for when I want something over my shoulders while sitting on the couch, and will probably use this. One of these days. 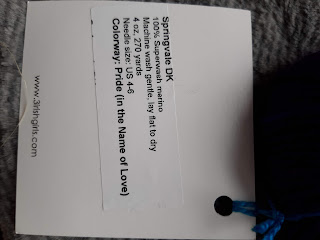 The yarn store I ordered from, Eat Sleep Knit, has a rewards program and for my order, I earned the Wool Winder Mill level, as well as a $5 store credit. They sent me a patch! 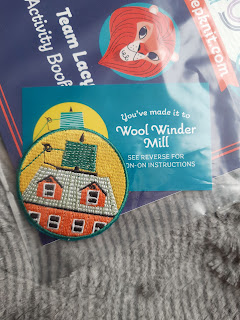 They also sent a yarn lotto card, on which I earned another $5 store credit. (And a grape lollipop, my favorite flavor!) 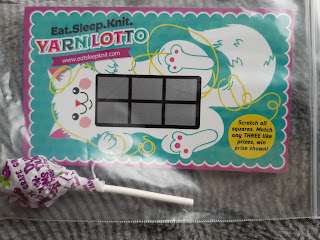 And I got an email from them noting that my box was showing as delivered, that they hoped I liked it, and here, have 10% off your next order. Whew! I certainly will be ordering from them again. They have quite a wide range of brands, and excellent service.

I haven't been much more energetic today, but I've managed to do a little. The quick project I mentioned on Thursday was a headband, since it occurred to me* that without haircuts (I usually get a trim every four weeks), my bangs will be growing into my eyes soon and driving me crazy. I found the Hot Mess Headband on Ravelry, a simple pattern with a cable twist in front, and started it Thursday night during my virtual knitting group. Worked on it a bit more Friday night, and finished it up today.
*It's funny, isn't it, how the mind wanders around to find things one can do something about, in this awful mess of uncertainty. 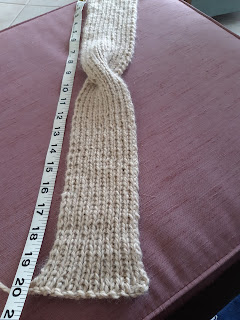 Twenty inches long, roughly, sewed the ends together (if I make another, I might do the provisional cast-on and then kitchener the ends together, for less of a seamed look) and ta da, done. 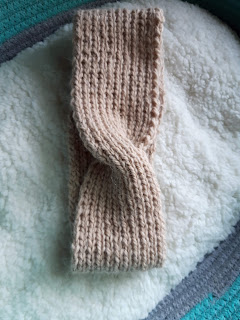 And then back to the Trianglegram shawl. Which bunched up nicely in my lap. 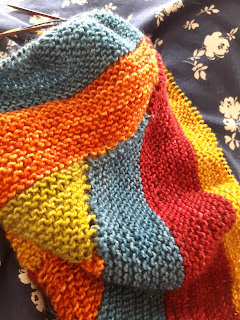 Colors a little washed out from the lighting (the green is greener than that in real life), but fun all the same.
Posted by ccr in MA at 3:42 PM