Knitting (and Finishing!) This, That, and the Other

A week from now I'll be on my way to New York, before I go to Massachusetts, then NY, then MA, before returning home. Safe to say, it's going to be quite a trip! And there will be a distinct yarniness to it, I am happy to say.

For one thing, I'll be seeing my friends' baby as he turns a year old, and giving him this: 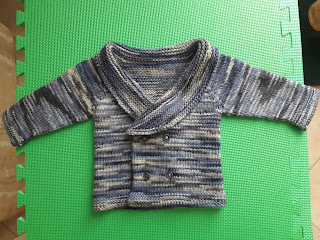 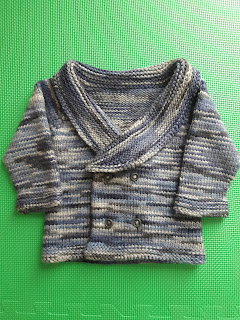 I'm quite pleased with how this sweater came out! (The pattern is Henry's Sweater.) I hope it fits him. As the knitter, I can say with confidence that it's not perfect, but as the Yarn Harlot mentions in one of her books, if it's hand-knit, it's okay if it looks like a human was involved in its making (I'm paraphrasing, of course). If I wanted to give him a machine-knit sweater, I could have, but it wouldn't have been half the fun.

I also finished the last pair of socks (pre- and post-washing photos to come), and started the next pair, because it's not like I can be without a pair in progress. 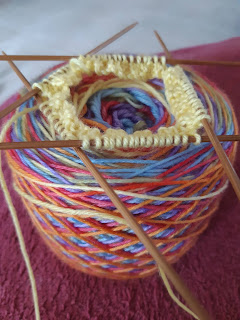 The yarn is Continuum Self Striping from String Theory Colorworks, and I'm very excited to see the wide stripes develop.

For the trip up for the funeral, I pulled the Seashell Shawl out to bring for travel knitting, since at that point the sweater was almost done (I was on the second sleeve). I had put the shawl aside to start the sweater, and was pleased to find that I still enjoy the shawl. 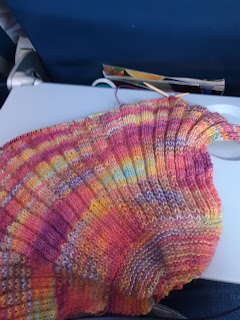 I mean, it's a good thing, I have quite a ways to go! But it will come with me on this next trip, and I expect to have a lot of knitting time, so we'll see how it looks when I get back.

Last night, meanwhile, I was knitting on yet another project: the blanket I've been working on for over a year! The poor thing has been put aside for project after project, but I'm going to try to make a hockey-knitting priority. It's such nice yarn (Three Irish Girls Springvale Worsted), and I want the blanket already. 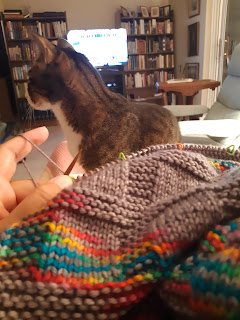 We'll see how that plan goes, but it was off to a good start last night, as the Bruins began the new season at last! Go, Bruins.
Posted by ccr in MA at 4:48 PM