As I get used to the smart phone, I sometimes look at my array of devices and laugh. At myself, I mean, as well as at the situation.

Here they are, with the same thing on each screen (that's capable of it) for a good comparison. 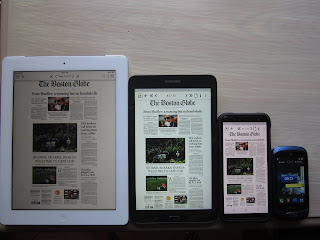 
4 is included for comparison only, I'm not using it any more. But I am using all three of the others!

I use the iPad for reading the newspapers (Boston Globe all the way through, though not every word, and then bits of the Naples Daily News and the Washington Post). I really like the larger screen for this purpose. Sizing of 1 and 2: 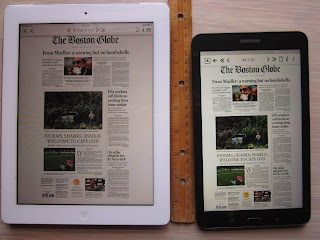 I also use it for audio books on Audible, mostly to play me to sleep at night; sometimes for playing solitaire games; and for listening to podcasts, though it's possible that will migrate to 3.

With less than a week of use with the smart phone, it's hard to say how much of what I use 2 for will migrate to 3. I can say that although 3 still feels small, 2 now feels big! Size comparison of 2 and 3: 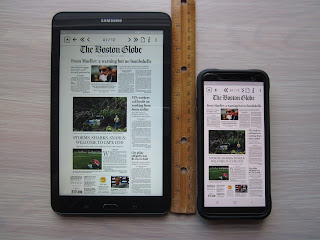 In other words, I can't imagine wanting to read the paper on the phone, except in emergencies. But I've put Instagram and Twitter on the phone, and am mostly accessing them there instead of on the tablet. I have a list of other things to put onto the phone, when I get/take the time.

Also, I'm loving the camera on the phone! It's much quicker than the tablet, and much better in low light, both of which make me happy. Also that it's possible to take pictures one-handed, which is not at all the case with 2.

Further updates to come, I'm sure, but that's where I am at the moment.
Posted by ccr in MA at 6:25 PM